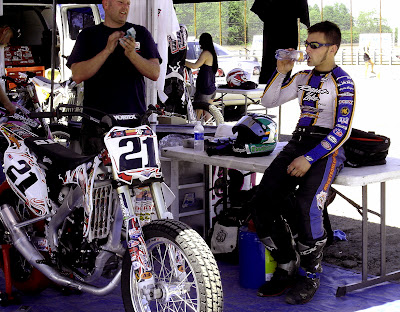 '09 AMA Pro Flat Track Grand National Twins Champion Jared Mees has been staying busy on the track since the last AMA Flat Track event in Arizona back in October.  Competing in and winning the championship (again) in the ICE Speedway Championship Series, The Jammer has also gotten in some short track racing indoors and out.  Two weekends ago, he competed in the San Jose Indoor put on by one of his sponsors, Rod Lake, and again pulled off the win on the concrete short track.  Along the way he made various stops (and several more wins) at some Eddie Mulder events, the Stockton Mile, and several of the Steve Nace Racing events in Southeast Georgia and in Florida on the way to the '11 AMA Flat Track season openers in Daytona in March.

Although going winless in the '10 AMA Pro Flat Track K&N Filters presented by Motorcycle Superstore.com Grand National Championship Series, Mees still ended up ranked the third rider in the nation in the year-end standings.  Garnering eight podiums on the year in both the Twins and Singles Series events, the Rogers Lake/Blue Springs H-D/Rockysonline.com-sponsored rider was in the fight in for the top spot in most of those races only to come up just short of the win at the checkers.  And it wasn't for lack of trying!

Jared released this press release at the end of March where he talks about running the San Jose indoor event.  Thanks to the great folks at FlatTrack.com for carrying on Wayne Hosaka's legacy and posting this release from this great rider:

Larry Lawrence's The Rider Files.com has this update from early March on The Jammer's online updates that are now available:

Digger Helm is a former National-ranked rider (he wore #57 back in the day) who is now one of Jared's personal sponsors.  He puts on the Digger Helm National in Bakersfield, CA. of which Mees is a former winner.  This great vido is a nice look at this great National-caliber event:

Thanks to FlatTrackToday.com for this link to keep up with Jared's racing endeavors.  Most recently posted as of this writing is Jared's review of the Daytona action and has some great shots of both his Twins and Singles Series bikes with his new National #9 on them:

And a BIG thanks goes out to Miriam Deitcher, who along with her Flat Track Live Facebook page got this great little video on the San Jose event over the last weekend in March.  This is another great site to bookmark for 'Live' coverage this year of the AMA Pro Flat Track Harley-Davidson Insurance Grand National Championship Series, and Mir has you covered if you can't make the races: