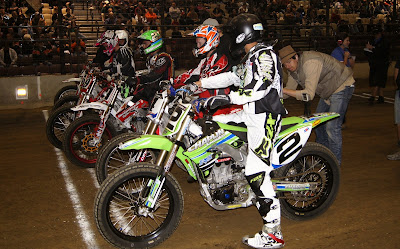 The intensity is in the air and can be seen in the riders' eyes as the main event gets ready to roll off in round 3 of the 2011 AMA Pro Flat Track Harley-Davidson Insurance Grand National Championship Series inside the confines of the Southern Illinois Center at DuQuoin, IL. on Saturday, April 16.  With the first indoor short track on the series' schedule in over six years getting ready for 'go time' for the 30 lap main, riders take their position and get their last breath before fighting it out on the bullring track that proved to be fast, furious and exciting.
With experience triumphing over youth at DuQuoin, round 3 showed that it's not always the fast and the young that get it done, but that veteran leadership all-to-often plays out when it comes to making it to the end.  The top three finishers on the bullring at DuQuoin had a combined 115 + wins amongst them, as well as over 14 total AMA Flat Track Championships on their resumes.  End results of the event were far from what many had thought and predicted, only to show that at any given time, anything can and likely will happen in the Rolling Thunder Show.
Riders chomping on the bit on the front row of the DuQuoin Indoor Short Track above are #37 Jimmy Wood on his Southland Racing Honda CRF450R, #45 Jesse Janisch on his #45 Weirbach Racing Honda, #49 Chad Cose on his M.E.H. Corp. Honda, followed by #9 Jared Mees on his Montgomeryville Cycle Center Honda, #4 Chris Carr on his DFW Honda, and event winner Kenny Coolbeth, Jr. on his #2 Chaplin Kawasaki KX450F.  Carr followed The King of Cool home in second (.606 seconds shy of the top spot on the box) for his best finish on a short track in over five years, with defending GN Champ Jake Johnson coming home third on his Zanotti Racing Honda 1.625 seconds back from Coolbeth.  Mees and Slammin' Sammy Halbert on his #7 Woody Kyle Yamaha rounded out the top five.  Will Fulford from The Fast and Dirty.com can be seen on the right side of the shot getting final adjustments made to on-board cameras for the event.
-------------------------------------------------------------------------------------------------------------

DAYTONA BEACH, FL (April 21, 2011) - The AMA Pro Harley-Davidson Insurance Flat Track Championship is set to invade the West Coast for the first time in 2011 over the Easter weekend, as Salinas, California's Salinas Sports Complex plays host to Rounds 4 and 5 on April 23-24. Saturday will feature a TT Steeplechase, followed by a Short Track on Easter Sunday, all adding up to one can't-miss event.

For the history buffs out there, this isn't the first Grand National to be held in Salinas ... a Half Mile National was staged in the Monterey Country city back in 1968, a race in which none other than former Grand National Champion Mert Lawwill took victory. Amateur and Pro-AM TT racing at the Sports Complex dates back to the early 1960s.

Fast forward to 2011, and the all-new cast of characters that makes up the AMA Pro Racing "Rolling Thunder Show" is getting set to continue the tight, handlebar-banging action that's typified the 2011 season. Three-time Grand National Champion Kenny Coolbeth is fresh off his first Short Track National win (at last weekend's DuQuoin event) and will be looking to notch his first TT win on his Chaplin Kawasaki-backed Kawasaki.

Current points-leader Sammy Halbert (Fredericktown Yamaha/Woody Kyle Racing) backed up his pair of Daytona wins with a come-from-behind fifth-place result at Round 3, but he's looking to expand on his 16-point lead in a big way. Meanwhile, Coolbeth is tied for second in the points chase with defending Grand National Champion Jake Johnson. And though Johnson's a Pennsylvanian, Salinas will be something of a of a hometown event for his crew, as the Zanotti Racing Team is based in California.

Henry Wiles, who's dominated Grand National Singles racing over the last few years, will be trying to straighten out what's been a trying year for the Monster Energy Kawasaki/Don's Kawasaki-backed effort. After getting banged around at last weekend's DuQuoin event---- and coming away with a dismal 19th-place finish---- Wiles is twelfth in points, but that deficit probably won't last long.

Salinas's own Stevie Bonsey will be looking to keep the victories local as he brings his potent Mack Daddy Racing Honda out with a chance to perform in front of friends and family. (Watch for an upcoming "Notes From the Blue Groove" column on Bonsey, who doubles as a quick road racer, and check out Mark Gardiner's DuQuoin-to-Salinas column right here:

South Dakota's Gerit Callies has taken possession of the Motorcycle-Superstore.com Pro Singles points standings after his dominant performance in DuQuoin. California's Mikey Avila had been tied with Callies, but his ninth-place finish at Round 3 leaves him 14 points back, in second. Another Californian, Mikey Martin, rests third in the points.

The AMA Pro Flat Track Harley-Davidson Insurance Grand National Championship Series returns to the west coast for Easter Weekend for rounds 4 & 5 of the 2011 schedule.  The first National to be held in Salinas (the home to such motorcycle racing notables as the late Ricky Graham, 3-Time AMA Superbike Champion Doug Chandler and 3-Time 500CC GP World Champion & '83 AMA Superbike Champion Wayne Rainey) since the late 60s, should provide a high level of excitement on the TT and short track at the Salinas Sports Complex.

(NOTE on all links below: If you are like me and can't be AT the races, you want every advantage you can have to keep up with the action.  All links below will keep you up to date with on AND off-track action, and all can be opened into a seperate window-so you don't have to navigate back and forth.  If you are using Windows XP or 7 and at least IE8, all links can be right-clicked and opened into either 'new tab' or 'new window' for easier viewing.  If you're like me, you'll have several open to better navigate the action!)

Miriam Deitcher, Ms. AMA Pro Flat Track Live, will be reporting all weekend from the Salinas Sports Complex via her Flat Track Live Facebook page.  She's already got some pics up to get you fired up for today and tomorrow's action:

AMA Pro Flat Track results and info (PDF versions/updated within minutes) for round 4 at the TT in Salinas can be found here:

AMA Pro Flat Track results and info (PDF versions) for round 5 at the Short Track in Salinas can be found here: