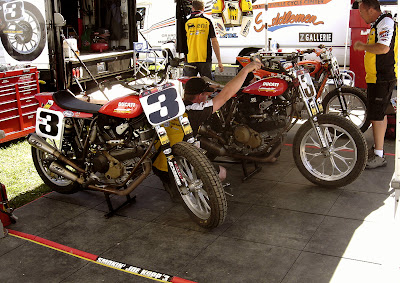 The LBM Ducati Hypermotard 1098s of rider Joe Kopp get some final work done by some of the team members in preparation for the Springfield Mile round of the AMA Flat Track Grand National Championship Series in September of 2010.  Team co-owner Dave Lloyd can be seen in the background, center of the shot just behind '00 AMA Grand National Champion Kopp's Latus H-D XR750, as he goes about getting last minute details together for the team.
The LBM team unofficially announced last month that they had signed '09 AMA Pro Flat Track Pro Singles Champion Brad Baker to ride the team's Ducatis in the 2011 AMA Grand National Championship Twins Series events, and they made the signing official late yesterday along with the signing of the new team sponsors.  Baker, one of the sport's great up-and-coming riders and personalities, should be a great fit to the team after having fielded Kopp during the 2010 Twins Series campaign.  Baker will be wearing National #12 for the upcoming season, and started off the season on a high note with 4th/3rd place finishes at Daytona.
With Smokin Joe announcing his retirement from full-time flat track competition, LBM was forced to look for a replacement for the '11 season after taking the team's Ducati to the May 2010 Arizona Mile win.  Kopp ended up 2nd in the season-ending championship standings and also won his semi at Springfield to punch his ticket to the main several hours after this shot was taken.  Kopp and the LBM team's win at the Arizona Mile was the first by any make other then Harley-Davidson in a Twins Series event since August of '98. 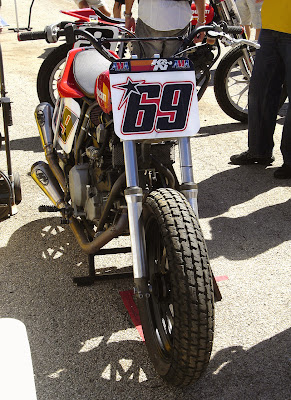 One of the Lloyd Brothers Motorsports team's Ducatis sits on display outside the LBM pit area adorning the #69 of one Mr. Nicky Hayden, the '02 AMA Superbike Champion and '06 MotoGP World Champion, who did some 'parade' laps on this machine some eight days earlier at the Lucas Oil Indy Mile.  Hayden's bike was set up by LBM for him to 'lap at leisure' for the fans at the Indy round as part of Ducati's announcement over the Indy MotoGP Weekend that they had re-signed 'The Kentucky Kid' to ride for the team in 2011 and in 2012.
The Kid didn't dissapoint the crowded house on the Indiana State Fairgrounds mile oval, and when he was done everyone in the house knew that he was all but home in his environment, announcing that 'one day' that he would be back.  Mike and Dave Lloyd, the co-owners of the team, set this bike up on display the next weekend along with a special plaque that included the original number plate on the bike and a shot of Nicky on the Indy Mile (autographed as well!) that eventually was auctioned off on eBay.  You can just see the bottom edge of the plaque off to the right of the front wheel assembly.
The profits from the eBay auction went to the Airfence fund to help pay for more sections of safety barrier on the AMA Pro Flat Track tour.  Another of Joe Kopp's #3 Ducatis can be seen in the background on display for the fans as well.


Lloyd Brothers Motorsports, Inc. (LBM) is proud to announce the continuation of our AMA Grand National Flat Track program for 2011.

The 2010 racing season was extremely successful for Lloyd Brothers Motorsports. Highlights include 2000 Grand National Champion Joe Kopp winning the Yavapai Mile in Arizona in his very first race aboard the LBM Ducati-powered flat tracker. This was Ducati’s first win in the over 100 year old series and the win broke a 29 year win streak shared by specific-built factory flat track Honda and Harley-Davidson engines.


In addition to Kopp’s historic win, LBM was privileged to host AMA Pro Racing Superbike racer Larry Pegram to race at the Springfield and Indy Miles and Ducati Factory Moto-GP star Nicky Hayden for exhibition laps at the Indy Mile in front of the very appreciative capacity crowd.


At the season’s end, Joe Kopp announced his retirement from full-time flat track competition. Kopp’s recommendation for a potential new rider for the team was fellow Washington State racer, Brad Baker. “Brad is 18 years old and the 2009 AMA Pro-Singles champion. I have watched this kid for a long time and he is the real deal. He’s a hard-worker, has loads of talent, is very appreciative and has the potential to move to the front very quickly with a solid team behind him” said Joe Kopp.


“With Joe’s retirement, we found ourselves in a position to secure a rider that fits into the long-term growth plan of our team, our sponsors and AMA Pro Racing. We approached Brad Baker and we are very happy that he accepted our invitation to join the team” stated team co-owner David Lloyd.


“I have watched a lot of fast young men coming up into the expert ranks over the last 23 years” continued team co-owner Michael Lloyd. “It takes a combination of talent, physical ability, desire, a strong mind set, extreme confidence, a strong work ethic and a personality that fits well with a solid team to make it to the front as an Expert. Brad possesses all of these assets. Dave Gamble, Kevin Atherton, David Lloyd and I are confident that Brad’s rookie season will be very successful.”


“We are very proud of both product and financial participation from our sponsors. Thanks to LBM’s top quality sponsors, we are very confident in our ability to finish well in each event.” reports team co-owner David Lloyd.

First place prize is a 2009 Buell Ulysses XB12XP - AMA Pro Racing Pace Motorcycle with under 210 original miles donated by AMA Pro Racing. The motorcycle will be transported, displayed and have tickets sold by Lloyd Brothers Motorsports, Inc. at each of the half-mile and mile Grand National Flat Track races.

The fund raiser has a second place prize of a new Arai helmet. “Everyone at Arai Helmets is proud to be able to donate to this fund raiser to raise money for the air fence that is used at flat track races. Arai Helmets has a long history of supporting the Grand National Flat Track Series by supplying the majority of the racers with our products and contingency to keep them as safe as possible” said Bruce Porter, Director of Marketing and Professional Motorsports Promotion for Arai Helmets.

“AMA Pro Racing is committed to growth of flat track and safety is a major component of that process. We are pleased the Lloyd Brothers team is taking the initiative in organizing this fund raiser to help repair existing air fence and purchase new air fence,” commented Dan Johnsen, Director of Flat Track at AMA Pro Racing.

“We are excited to help raise funds for flat track air fence” stated Lloyd Brothers Motorsports co-owner David Lloyd. “Air fence is invaluable to the safety of racers. We are really hoping that the flat track community will rally around this cause so that we can expand the amount of air fence available for the safety of our racers.”

“We are really excited about this fund raiser,” says TeamHurtByAccident’s C.J. Czaia. “One of the main reasons that really attracted us to join forces with Lloyd Brothers Motorsports is the fact that they are coordinating a national season-long fund raiser in support of the Road Racing World Air Fence Fund. Safety is a prime concern in motorcycle racing and utilizing Air Fence is a major component in making racing safer.”

Tickets will be sold at each event for $20.00 each and the winners will be drawn and announced in front of the grandstands at the final race of the season. Winners don’t need to be present at the drawing; they will be notified after their ticket is drawn. A website will be established with a link at www.roadracingworld.com listing each ticket purchaser and their ticket number.

To learn more about air fence or to donate directly to the Air Fence Action Fund visit:


This is great news for AMA Flat Track fans to look forward to in the 2011 AMA Pro Flat Track Harley-Davidson Insurance Grand National Championship Series.  LBM and Brad Baker will be running their first event together at the Springfield Mile over the Memorial Day Weekend, and should prove to be a great combination together on and off the track.  Congrats to Dave and Mike Lloyd and team and new rider Brad Baker and we'll be looking forward to seeing them hit the track in late May!

And just to get you caught up, here is the original story posted last month when the news originally came about: