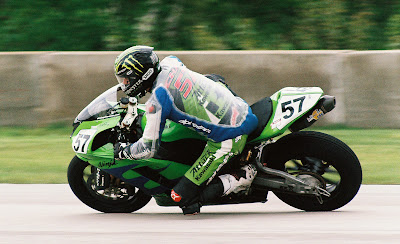 Chaz Davies throws the #57 Attack Performance Kawasaki ZX-6R into turn 11 at Road America during a wet practice session for the AMA Formula Xtreme Series as part of the Suzuki Superbike Doubleheader round at the Elkhart Lake, WI. track in June of 2008.  Combined with his win at the Daytona 200 earlier in the year and another podium finish at Barber Motorsports Park, Davies ended the year ranked in the 5th position in the overall Formula Xtreme Series Championship for the 2008 season.
Davies had previously also ridden for Celtic Racing in Supersport and Superstock competition, and at the end of the '09 season and a year of competition in the AMA Daytona SportBike Class riding for the Aprilia factory, he took a couple of 'try-out' rides in World Supersport with the ParkinGO Racing team and agreed to ride the team's Triumph Daytona 675s during the 2010 campaign.  With four podiums to his credit, he finished fourth in the final year-end standings (and first non-Japanese manufacturer.)  The team, however, wasn't able to come to terms with Triumph for the 2011 season, and switched over to Yamaha YZF-R6s for the 2011 season.  Yamaha Motor Europe supplied the team with the '09-spec R6s that Cal Crutchlow used to take the '09 World Supersport Championship with, and is also lending the team some factory support along the way.
Chaz took his first win in the series (in 19 total events he has ridden in) last Sunday, and now sits third in the standings, five points behind team mate Luca Scassa and two points behind Kawasaki rider Broc Parkes.  With ten more rounds left in the 2011 season, look for Chaz to keep improving his learning and riding curve as he has done throughout his riding career.  It should be a fun season and he will surely add to his six total podiums and breakout win as the season progresses.
-------------------------------------------------------------------------------------------------------------

Chaz Davies finally broke through and broke his cherry in the FIM World Supersport Championship this last weekend and took the win at Assen aboard his Yamaha ParkinGO Racing Team R6, besting a full field, dodging two red flags and taking the win by just over seven seconds after an eventful round.  Davies has progressively been moving up the charts in the series even more so now that the team is equipped with the Yamaha YZF-R6s, and if not for a tire that let him down at the first round at Philip Island in February could very well have been leading the championship standings after three rounds instead of being five points in arrears to team mate Luca Scassa.

The popular Englishman, who raced for several years here in the States in the AMA Road Racing Series, was a four-time podium finisher last year in the series while riding the ParkinGO Triumph Daytona 675.  But with the team unable to come to terms with Triumph for the 2011 season, Davies has found himself improving even more on the team's Yamaha R6s.

Thanks to Motorcycle News across the pond for this story on the World Supersport round in Assen:

Here's the press release from ParkinGO Racing about Chaz' breakthrough win at Assen on the Yamaha R6:

Complete results for the Assen World Supersport FIM World Championship round are here:

SpeedTV.com's Chris Martin talked to Chaz after his big win at Assen over the weekend:

Here's a short interview on YouTube.com from the folks at Superbike News in the UK that was filmed at the previous round with Chaz talking about the Yamaha R6 and the ParkinGO team:

This was the original press release when ParkinGO Racing made the announcement that they would be racing the Yamaha's in the 2011 World Supersport Series after having raced the Triumph Daytona 675 the previous year.  Thanks to Dean Adams' SuperBikePlanet.com for this release: