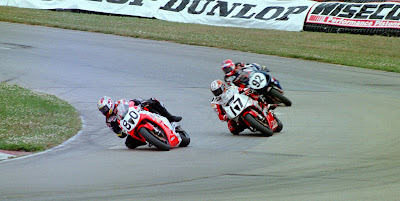 Also showing strongly in SuperBike testing was Jordan Suzuki's Roger Hayden, who returns to the AMA Pro series this year after a difficult 2010 season in World Superbike. At the opposite end of the experience scale from those listed above, Cycle World/Attack Performance Kawasaki's JD Beach used the test to make his debut AMA Pro SuperBike appearance, dropping more than 7.726 seconds between his first and best session to finish with the 12th-quickest time overall.


In related news, following a productive meeting held late Tuesday at the Utah track between AMA Pro Racing officials, Josh Herrin, and Graves Motorsports Yamaha personnel, AMA Pro has determined that Herrin will serve a one-race suspension at Round 2 instead of the two-race penalty originally assessed post-Daytona. "The communication and shared understanding between parties was such that AMA Pro felt it was appropriate to move forward in this manner," said AMA Pro Racing COO David Atlas.


The top five Daytona SportBike riders at the MMP test were as follows: Jason DiSalvo, 1:55.254; PJ Jacobsen, 1:55.596; Josh Herrin, 1:56.543; Cameron Beaubier, 1:56.881; Cory West, 1:56.981.
Sixteen-year-old Benny Solis impressed in AMA Pro Motorcycle-Superstore.com SuperSport testing, the Team Roadracingworld.com rider topping the majority of the two days' sessions, but he was narrowly edged out in the test's final hours by LTD Racing/Y.E.S. Yamaha's David Gaviria, who posted the quickest SuperSport lap of the test in the seventh session.

Sixteen-year-old Benny Solis impressed in AMA Pro Motorcycle-Superstore.com SuperSport testing, the Team Roadracingworld.com rider topping the majority of the two days' sessions, but he was narrowly edged out in the test's final hours by LTD Racing/Y.E.S. Yamaha's David Gaviria, who posted the quickest SuperSport lap of the test in the seventh session.

Gaviria's teammate, Tomas Puerta, also showed well, topping one session and turning in the fourth-quickest lap overall, but it was Vesrah Suzuki's Corey Alexander (currently in his first full season of AMA Pro competition) who really came into his own at MMP. Alexander turned in the third-quickest SuperSport lap at the circuit, just a few tenths behind Solis.

For complete results from the test at Miller for all four classes, click here:

With AMA Pro Road Racing's Round 2 at Infineon Raceway now just ten days away, series participants return home for a short break before heading to Sonoma, California's pastoral wine-country, soon to get loud with the sounds of Infineon Raceway's West Coast Moto Jam. For information about and tickets to the California circuit's May 13-15 AMA Pro Road Racing weekend and surrounding events, visit http://www.infineonraceway.com/.

AMA Pro Racing is the premier professional motorcycle racing organization in North America, operating a full schedule of events and championships for a variety of motorcycle disciplines. Learn more about AMA Pro Racing at http://www.amaproracing.com/.