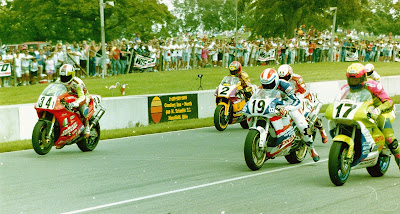 The Wiseco Superbike 100 main event of the Camel Super Cycle Weekend presented by Dunlop gets off to a re-start on August 2, 1992 at the Mid Ohio Sports Car Course, after a red flag caused by a crash involving Vance & Hines Yamaha rider Larry Schwarzbach on the front straight delayed the race for close to an hour.  Unfortunately, Schwarzbach succumbed to his injuries less then 48 hours later, and as with all things in life, the racing did go on that day as the front row of the premier AMA Superbike Championship Series contenders roar away from the starting line.

Behind him on the #2 Vance & Hines/Bel Ray/Bell/Bates-backed Yamaha YZF-750, Jamie James tries to make up for the meat ball flag he had just served several laps before the red flag for getting what AMA officials deemed a 'pretty good jump' on the original restart.  Of note--notice the front brake shrouds on the '89 AMA Superbike Champion's bike.  Factory teams in those days were using carbon fiber brakes, which take an intense amount of heat built up into them in order to operate efficiently, thusly the covers on the #2 machine.  The extra costs for running the carbon fiber stoppers in those days was reported to be in the 'thousands of dollars' area.  In other words for us plain city and country folk, unobtanium.

Freddie Spencer appears to be 'gliding' off the line on his #19 Two Brothers Racing/Honda Motor Co/Michelin-sponsored RC-30, which of course would look that way coming from a former 3-Time World GP Champion.  Spencer would win several races for the Erion Brothers team before finishing out his career running Ducatis for Eraldo Ferracci in the AMA Superbike Championship Series after returning from Europe and winning, most notably, the '83 World 500CC Grand Prix Championship and the '85 250CC and 500CC World Grand Prix Championships.  Spencer was the youngest man at the time to ever win the premier 500CC Championship, and last man to have won two championships in different classes during one year.

Just behind Fast Freddie, partially blocked, is the #23 FBF/Ducati Mechanica/SPA/AGV-sponsored Ducati 888 of Doug Polen, who won the '91-'92 World Superbike Championships before returning to the U.S. full-time in the '93 season to win the AMA Superbike Championship, as well.  Polen would go on to lead runner-up Thomas Stevens ('91 AMA Superbike Champion) on the #1 Muzzy Kawasaki and 3rd place finisher Tom Kipp on the #16 Commonwealth Camel Honda to the event win.  Also to note, it was just announced in the last day or two that Polen will be enshrined in the AMA Hall of Fame this November.  Bravo, as it's been a long time coming!


DAYTONA BEACH, FL (May 23, 2011) - Hot on the heels of a great weekend of racing at Infineon Raceway's May 13-15 West Coast Moto Jam, the AMA Pro Road Racing paddock is ready to celebrate Memorial Day with some international friends. May 28 through 30, AMA Pro will join the FIM World Superbike Championship for the BigM Weekend Presented by Lucas Oil, hosted by the spectacular Miller Motorsports Park facility in Tooele, Utah.

AMA Pro returns to MMP following a two-season hiatus, but the series' official test at the circuit in early May proved the field is more than ready to work the flowing 3.048-mile track. That's especially true of reigning AMA Pro National Guard SuperBike Champion Josh Hayes (Monster Energy Graves Yamaha), who was dominant in both days of MMP testing and is coming off a Race 1 win at Infineon's Round 2.

Hayes won't have it easy, though; having split Infineon wins with Rockstar Makita Suzuki's Tommy Hayden, Hayes enters MMP Round 3 with a slim 6-point lead in the standings. Hayden himself has more to worry about than just the rider ahead, however; teammate Blake Young sits just two points behind in third overall, and despite a difficult Race 2 at Infineon, M4 Suzuki's Martin Cardenas remains fourth overall, the reigning AMA Pro Daytona SportBike Champion having proven he's a SuperBike contender by notching his first podium-finish (a third) in last round's Race 1.

Though the depth of talent in the Daytona SportBike field is almost as incredible as the class' tendency toward ten-deep lead changes that at times run four-wide, one rider has been unquestionably dominant in the results thus far: Team Latus Motors Racing's Jason DiSalvo, who's gone three-for-three in the series' opening rounds. Infineon, however, saw him regularly challenged by Monster Energy Graves Yamaha's Josh Herrin, GEICO Powersports/RMR Suzuki's Danny Eslick, and then-privateer Jake Holden. With the latter having since picked up season sponsorship from RidersDiscount.com, DiSalvo's sure to have his hands full at MMP.


The AMA Pro Motorycle-Superstore.com SuperSport class will also see its ranks swell at Round 3, as the BigM Weekend's edition of the rising-star class, the AMA Pro Motorcycle-Superstore.com SuperSport Larry H. Miller Challenge, will feature a host of top local talent, all vying for a piece of the purse that's been doubled for this special event. Taking on all newcomers will be top series regulars like Roadracingworld.com's Benny Solis, Y.E.S./LTD Racing's Tomas Puerta and David Gaviria, Vesrah Suzuki's Corey Alexander, and more.

MMP fans will also be treated to the sights and V-twin sounds of AMA Pro Road Racing's newest class, the AMA Pro Vance & Hines XR1200 division. These handlebar-to-handlebar, footpeg-dragging monsters are in their first full season of AMA Pro competition, and the already-packed field through which riders like Chris Fillmore, Kyle Wyman, Steve Rapp, and Michael Barnes barrel will see the return of reigning class champion Danny Eslick (joining RMR/Bruce Rossmeyer Daytona Racing teammates Fillmore and Wyman) aboard the #1 machine.

SPEED TV will highlight all of Round 3's AMA Pro races via an AMA Pro Road Racing Special set to air Monday, May 30, at 9 p.m. PST/midnight EST, and will broadcast the Motorcycle-Superstore.com SuperSport and Vance & Hines XR1200 contests live on SPEED2. There won't be any substitute, however, for being there in person, as MMP has planned a big lineup of weekend concerts. Saturday night will feature country superstar Dierks Bentley, supported by Sawyer Brown and Reckless Kelly, while Blue Oyster Cult and Creedence Clearwater Revisited will take the stage on Sunday night. Whether you're a die-hard road race fan or just an admirer of all things wheeled, MMP is the place to be this Memorial Day Weekend.

Round 3 of the 2011 AMA Pro Road Racing Series , the BIGM Weekend presented by Lucas Oil, from Miller Motorsports Park in Tooele, Utah will kick off on Saturday, May 28.  Event info can be found here:

Here is the event info link for all of the classes and PDF files that will be available throughout the weekend:

And here is the link to AMA Pro Road Racing's Live Timing so you can keep up with all of the sessions throughout the weekend: