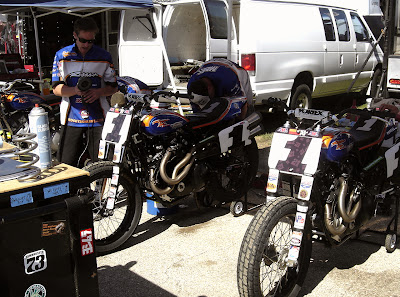 Jared Mees' #1 Rogers Lake Racing/Blue Springs H-D/Rockysonline.com/Saddlemen-backed Harley-Davidson XR-750s get final prep work done to them by a couple of the Rogers Lake Racing crew during a break in the program at the Springfield Mile round of the '10 AMA Pro Flat Track K&N Filters presented by Motorcycle Superstore.com (now for 2011, Harley-Davidson Insurance) Grand National Championship Series on September 5.  One of Mees' long-time sponsors in the series, the quality and craftsmanship that goes into one of their AMA Flat Track Twins Series seats can be seen in this shot, and the Saddlemen name can be seen prominently displayed on his Twins Series XRs in this shot on the top/sides of the fuel tank.

DAYTONA BEACH, FL (May 23, 2011) - The AMA Pro Harley-Davidson Insurance Flat Track Championship is proud to announce that Saddlemen---- a leading producer of motorcycle seats, saddles, and luggage---- has, for the second year in a row, stepped up to sponsor the series' prestigious Rookie of the Year Award. The Saddlemen Rookie of the Year Award will pay out a total of $7,500 at the series' year-end awards banquet, to be shared $5,000/$2,500 between the championship's top two Expert Rookies.

"We couldn't be prouder to welcome Saddlemen back as the sponsor of this award," said AMA Pro Racing Managing Member and C.O.O. David Atlas. "The sport of flat track has produced some of the greatest names in motorcycle racing, so it's wonderfully fitting that a company of Saddlemen's quality supports the recognition of its future stars."

Saddlemen President Tom Seymour added, "The sport of flat track is exciting, a truly unique form of American racing. There is no better racing competition available anywhere in the world. It is my goal to make sure the next generation of racers is supported---- that's why we sponsor the Rookie of the Year program."

Join us for the next round of the AMA Pro Harley-Davidson Insurance Flat Track Championship: the legendary Springfield Mile and TT, held May 28-29 at the storied Illinois State Fairgrounds. For tickets and information, visit www.illinoismda.com or call (217) 753-8866 or (888) 468-1622.


To learn more about the full range of Saddlemen products, visit www.saddlemen.com  or find them on Facebook.
Be a part of the AMA Pro Harley-Davidson Insurance Flat Track Championship by visiting www.amaproracing.com/ft  and joining us on Facebook and Twitter.

You can check out Saddlemen's line of work here:

Keep up with Jammin' Jared Mees via his official site here: