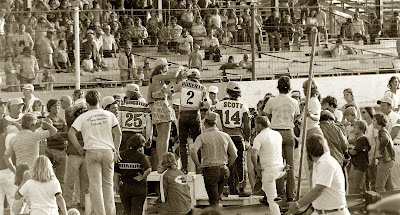 After having followed AMA Flat Track Grand National Championship Series racing since mid '74, I have to admit I'm a big sucker for the nostalgia of the years gone by of having been able to see stars like Kenny Roberts, Gary Scott, Mike Kidd, Hank Scott, Rex Beauchamp, Corky Keener, Jay Springsteen and many others battle it out in the 'glory days' of racing.  These were the legends of the day, much like stars such as Jake Johnson, Henry Wiles, Sammy Halbert, Joe Kopp, Kenny Coolbeth, Jared Mees and a host of others are in today's AMA Pro Flat Track Harley-Davidson Insurance Grand National Championship Series.

The years that shaped the grooming of a young high school kid who had found the addiction of his life were very powerful, so when I come across some great reading about those days, I pretty much turn to butter.  Larry Lawrence maintains his website, The Rider Files.com, and as many of you know writes one of the best columns for Cycle News.com, 'Archives.'  Paying tribute to those years of lore and lust from the earlier days in motorcycle racing history, LL's column is a MUST READ for anyone even slightly interested in the racing of those days gone by.  Whether it be road racing, flat track, motocross or hare scrambles, this column is sure to bring back memories to those of you who have come up through the years around motorcycle racing of some sort or another.

This week's Archives in CN looks back at the '76 AMA Camel Pro Series/Grand National Championship Series season, when The King, Springer and that same host of other legends of the sport criss-crossed the country in a 90K mile journey to capture the coveted #1 plate in Grand National racing in what was a 28 race series schedule.

You can read part one of Larry's great trip back in history here:

And just to keep your palate wet while we wait on what will surely be a super part two review of the '76 season, you can read this great article written by Sam Moses, and posted in Sports Illustrated's archives.  This story was originally penned in November 1976 and appeared in print in S.I.: