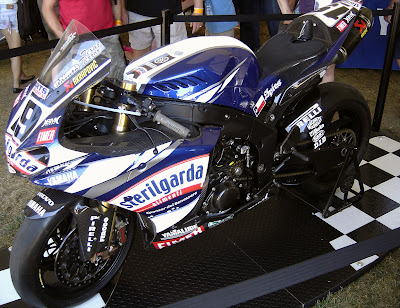 The World Superbike Championship Series visited the fastest circuit on the calendar in Monza, Italy over the weekend for round 4 of the 2011 season, and 'rookie' and new Stonex Yamaha World Superbike squad member Eugene Laverty got the double win for his first taste of the podium and first-ever wins in the premier series.  The 2-Time World Supersport Champion runner-up led 17 of 18 laps in winning race one on his #58 Yamaha R1 over defending World Superbike Champion Max Biaggi on his #1 Aprilia RSV4 Factory machine by 1.575 seconds, and then taking advantage of a miscue by Biaggi in race two, which saw Biaggi forced to complete a 'ride through' penalty for overshooting a turn while leading the race by several seconds.  Laverty also took advantage of team mate Melandri's slide on his #33 Yamaha R1 while going through the infamous Parabolica turn on the last lap run to the checkers to get around him to take the win by just .327 seconds.

The Yamaha World Superbike squad is seeing an early-season turn around after the great year the team had with Ben Spies winning the '09 crown for the team, and last year's duo of James Toseland and Cal Crutchlow only winning three rounds on the year, all by Crutchlow.  Melandri is virtually turning his career around after several dismal years in MotoGP, and Laverty is establishing himself quickly as not only a 'rookie of the year' candidate, but as a full-time front runner, as well.  After taking the lead in race one at Monza over first lap leader Troy Corser on the BMW Motorrad Motorsport S1000RR, Laverty set sail at the front to win his initial race on the WSBK calendar.

In race two, however, the Irishman was forced wide and almost involved in a first lap crash that took out Jonathan Rea on the Castrol Honda CBR1000RR, Leon Haslam on the other BMW Motorrad machine and Jacob Smrz on the Team Effenbert-Liberty Racing Ducati 1098R, and was as far back as ninth place.  Slowly working his way up the grid, as well as taking advantage of other riders' missives, Laverty finally caught team mate Melandri with roughly five laps to and the duo put in some strong and exciting laps to the end.  Looking like Melandri would take his second WSBK race on the year with Laverty right on his tail section, and while going through the Parabolica last turn, Melandri's rear tire broke loose just enough for Laverty to inch out the win by the blink of an eye.

If you haven't seen the races yet, SpeedTV in the U.S. will be replaying them on Tuesday, May 10 from 1200-1400 EDT.  Be sure to set your DVRs as both of these races were full of some great battles, let alone seeing Laverty break his cherry in the premier superbike championship in the world.  With straightaway speeds in the neighborhood of 188.5 mph at the infamous Monza circuit, the racing was fast and furious all weekend from the time practice started on Friday, May 6.

Melandri and Laverty now sit 2nd and 5th in the 2011 standings after four rounds, with series points leader Carlos Checa on top of the leaderboard on his #7 Althea Racing Ducati 1098R with 145 points.  Melandri lies 27 back, with defending WSBK Champ Biaggi in 3rd just one point behind Marco.  Jonathan Rea sits fourth with 89 points and Laverty rounds out the top five just four points back of 'Mad Max.'

World Superbike has the official results for race 1 at Monza, Italy here:

World Superbike has the official results for race 2 at Monza, Italy here:

SpeedTV.com has this official press release from the Monza round about the first-time podiums AND wins for World Superbike 'Rookie' Eugene Laverty:

SpeedTV.com also offers up photos from the Monza doubleheader round over the weekend:

David Emmett's MotoMatters.com offers up this press release from Yamaha after the Monza round: