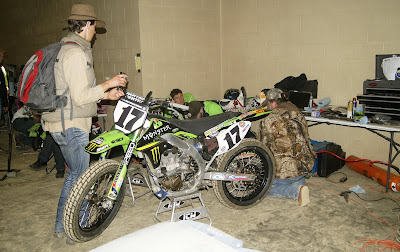 Something you don't see very often at any round of the AMA Pro Flat Track Harley-Davidson Insurance Grand National Championship Series is Henry Wiles sitting down.  Nor do you often see his #17 Monster Energy/Don's Kawasaki/Shift Racing/Jones Bros.-sponsored KX450F laying over on it's side-whether that would be ON or OFF the track.  The man who normally dominates the majority of the Singles Series stops on the AMA Flat Track Series trail suffered a left leg injury in one of the restarts of his heat race at round 3 at DuQuoin, as well as equipment issues with his high-flying Jones Brothers mount.  Henry can be seen in the back of the shot trying to relax before the main event as his team goes about changing out the clutch on his mount, while Will Fulford of The Fast and Dirty.com records the goings on in the Wiles/Jones Brothers pit area.
The man that won the last two AMA Pro Flat Track Singles Series Championships, and who has also won the last six Peoria TT rounds in a row, is unfortunately doing more sitting as of the last 12 days after suffering a knee injury during round 3 of the series' stops at the DuQuoin Indoor Short Track on April 16.  And after two seperate times of seeing his #17 KX450F on it's side in his pits at DuQuoin after suffering from what appeared to be clutch-related issues earlier in the day, the sight of this was good for a double-dose of head turning after having followed this fine young man and racer for the last 7+ years.  Not only has Hammerin Hank been lucky AND good in the racing department, but so have his Jones Brothers machines in terms of lack of no major mechanical issues to speak of in some time.
The good news is that Henry is on the road to a complete recovery after going under the knife courtesy of the surgeon to the racing stars, Dr. Arthur Ting in California, after winning round 5 of the series two weeks ago at the Salinas Short Track, and after the day before scoring a second-place finish in the Salinas TT behind defending AMA Grand National Champion and event winner Jake Johnson on his #1 Zanotti Racing Honda.  For a man whose left leg swelled to almost twice it's normal size after the debacle at DuQuoin, Henry did what racers do and went out the next weekend at the Salinas rounds and tore everyone a new one in scoring the most points on the weekend before heading to the surgeon's table the day after to have his leg repaired.  It was another classic example of determination from this personable and tough racer to be able to get through the weekend at all, let alone with the stellar results he achieved, all on a bum leg.
As it stands now, Henry is hoping and expecting to return to action at the Peoria TT round in August (thanks to Tyler Porter's Fight For Dirt Track.com for this update!) and is planning on attending rounds 6 & 7 at Springfield over Memorial Day Weekend in three weeks to talk with the fans and help to support his team and the sport over the big weekend.  With the events of the last several weeks putting Henry out of action for awhile, obviously his strong run of great finishes on his Kawasaki will have to take a back seat to healing his leg........for now.  But don't expect to see Henry out of action for too long, in what some are calling a 'normal eight month recovery time' from this type of surgery.  Henry is far from normal (as are most racers suffering from almost any type of injury) and he is hoping to cut that time in two in order to keep his winning streak alive at one of the oldest stops on the AMA Pro Flat Track Harley-Davidson Insurance Grand National Championship Series.
-------------------------------------------------------------------------------------------------------------

After suffering what could only be considered dismal results by any standards in the first three rounds of the 2011 AMA Pro Flat Track Harley-Davidson Insurance Grand National Championship Series, 2-Time and defending AMA Flat Track Singles Series Champion Henry Wiles went out and put it on the field in rounds 4 & 5 at the Salinas Motorsports Complex over Easter Weekend.  Scoring 47 points over the doubleheader weekend in California, Hammerin Hank made a big leap into 6th place into the overall point standings after the first five rounds of the scheduled 21 race season for the 2011 year by coming home second in the TT and winning the next day on the short track, the day before going under the knife for his damaged left leg.

The Clio, MI. resident knew going into the Salinas Doubleheader Weekend that he would be having surgery performed on his left leg after the weekend of racing was over, and wanted to do all he could to add to his recovery time in terms of adjustment by going out on a winning note.  And boy did he!  Showing why he is the current Single Series Champion, Wiles rode his Monster Energy/Jones Brothers Kawasaki like a man possessed, let alone in control, in both races over Easter Weekend.  At one point in the TT final after a front row start, Wiles had slipped to the 12th spot in the 18 rider main before blasting back to within 2.473 seconds of event winner Jake Johnson.  And then after mulling whether he would even ride the short track event the next day, he went out and lead all 25 laps of the short track event to beat out runner up (and first time AMA Grand National podium finisher and West Coast flat track specialist) Jimmy Wood by .169 seconds.

On Monday, April 25 Henry was on the operating table in reknowned surgeon Dr. Arthur Ting's clinic in California, having his left leg repaired after the damage incurred during his heat race at DuQuoin some nine days earlier.  Looking at what is normally considered close to an eight month recovery, Henry told Tyler Porter from Fight For Dirt Track.com this last week that he is looking to return to the track by the Peoria TT event in August, working to cut the 'normal' recovery time in half, with his hopes of getting back on track mid season.  Remembering back a few years when he suffered two broken wrists from what was called a 'roofing accident' at the time, Henry came back with a bang that year to keep his Peoria TT win streak alive, which now stands at six events in a row.

Time can only tell if Hammerin Hank Wiles will be able to return to action in the span of four months after recoverinng from his surgery, however, looking back at what he has done in the past and coupled with the return rate of riders to the track that Dr. Ting has had in the past, don't be surprised to see the defending 2-Time AMA Pro Flat Track Singles Series Champion fill that guesstimate.  Until then, it not only will give the rest of the stars of The Rolling Thunder Show a chance to win a Singles Series event at Springfield in three weeks time, but it will also leave a big, green hole on the track where the racy #17 would normally occupy a very dominant spot on the grid.

Here's wishing one of the great racers on the AMA Pro Flat Track Series schedule a quick, successful and short recovery from his surgery.  Although ultimately you will be missed ON the track by the fans (Henry has said he will be at Springfield to see and talk with the fans in three weeks), the competition might now be able to hold their collective breath for one Singles Series event in knowing that The Man on the Green #17 won't be there to snag a most-probable win on your second stomping ground.  After winning the last four short track races and last three TT races at Springfield, someone else will finally get a chance to break up that record, although with one of the sport's big stars absent while on leave!

Thanks to Will Fulford and Yve Assad from the super The Fast and Dirty.com for this great interview with Henry featuring some pics from his great win at the Salinas Short Track round 5 two weeks ago:

Another big thanks goes out to Tyler Porter, from the excellent Fight For Dirt Track.com, for this video interview with Henry after his win at Salinas and talking about undergoing surgery the day after his win:

Here is a link to The Inslide Line weekly report from Tyler Porter's Fight For Dirt Track.com that mentions Henry's surgery and his timeline for his return to the track:

Kawasaki Racing also has their version of the Salinas Short Track results with a few pictures of Henry hammering the competition in round 5 of the 2011 AMA Pro Flat Track Harley-Davidson Insurance Grand National Championship Series: