Celebrating 25 Years of the Suzuki GSX-R750 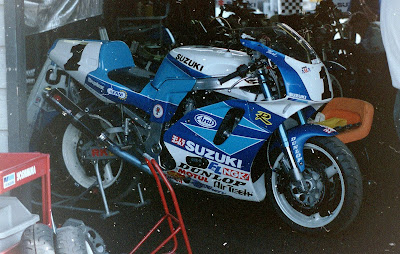 '93 AMA 750 Supersport Champion Britt Turkington's #1 American Suzuki/Yoshimura Racing/Dunlop/NGK-backed Suzuki GSX-R750 sits in the Yoshimura garage during the Honda Super Cycle Weekend presented by Dunlop Tire event at the Mid Ohio Sports Car Course in July of 1994.  Turkington won the '93 title for Suzuki after several years of domination in the class by Scott Russell on the Muzzy Kawasaki.

American Roadracing Magazine's Larry Lawrence had Turkington ranked the #10 racer of the year in it's pre-season rankings and the series biggest mover in the standings based on his '93 ranking in the 25th spot.  'Turk' won numerous events over the course of his career including Brainerd, Daytona, Road America, Mid Ohio and Laguna Seca, also winning championships in WERA and CCS competition and is now a track instructor for '93 500CC World Champion Kevin Schwantz' riding school.
It was said that since he was 'so good on the Yoshimura Suzuki Supersport bike' that people questioned 'why Suzuki didn't try him on the Superbike' after team mate Donald Jacks was injured midway through the '93 season.  Apparently the big heads at Suzuki racing felt that the 750 Supersport title was of great importance to them in terms of selling bike (race/win on Sunday, sell on Monday) that they didn't want to take any chance of 'Turkington getting injured on a Superbike.'  (Quotes noted from American Roadracing Top 40 article by Larry Lawrence.)

Aaron Frank takes a look back at 25 years of the Suzuki GSX-R750 in this article on Motorcyclist Magazine's site, Motorcyclistonline.com.  The article is also in print in the June 2011 issue of the mag, and does a very nice job of looking back at the history of the bike that hit North American shores in 1985, but it wasn't until '86 that the bike was available in the U.S.

The first model GSX-R750 hit American shores the next year, and as they say, everything in racing (and on the street) changed from then on, marking a period of dominance that still stands today and is as strong as the dominance that Yamaha once held in AMA Pro Road Racing with it's omni-potent, but albeit prototypical TZ-750.  Essentially, it became the weapon of choice in whatever class it raced for the most part.  And in the hands of 7-Time AMA Superbike Champion Mat Mladin, the 750 Gixxer won four championships ('99-'01, '03) in the premier series before making way, because of the rules changes in superbike racing, to it's big brother, the GSX-R1000 at the beginning of the '04 racing season.

Read on about the quarter century of changes to the Suzuki GSX-R750 here, and again a big thanks to Aaron Frank and Motorcyclist Magazine:

From back in April, Suzuki also looked at the GSX-R line as a whole, starting with the GSX-R750 and morphing into the GSX-R1000, in terms of the bike of choice in AMA Pro Road Racing in the AMA Superbike Championship Series, as well as the AMA 750 Supersport Series that later morphed into the AMA Superstock Series.  Here's the link to that article we posted: