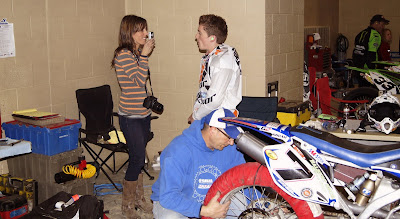 Miriam Deitcher, who brings us Flat Track Live Facebook coverage for AMA Pro Flat Track events (and other outstanding flat track series events across the North American continent), interviews Sammy Halbert at the DuQuoin Indoor Short Track, round 3 of the 2011 AMA Pro Flat Track Harley-Davidson Insurance Grand National Championship Series on April 16.  Slammin Sammy's #7 Woody Kyle Racing/
Fredericktown Yamaha/Kings Kustoms-sponsored Yamaha YZ450F is being attended to by one of his crew members just before Halbert went out and won semi race two to qualify for the main event at the Steve Nace Racing promoted indoor race inside the Southern Illinois Center on the DuQuoin State Fairgrounds.
Halbert went on to finish 5th in the main, and over the next weekend's events at the Salinas Sports Complex in Califinornia, finished 5th in the round 4 TT event and 3rd in the round 5 Short Track event.  He will roll into Springfield, IL. on May 28-29 for rounds 6 & 7 for the annual TT and Mile events at the Illinois State Fairgrounds with an eight point lead in the championship over defending AMA Pro Flat Track Grand National Champion, Jake Johnson, 103-95.  Kenny Coolbeth, Jr. rounds out the top three early in the season with 74 points.

"This is my first AMA Pro win," said Fillmore, "and I'm glad I was able to get it here at Infineon. Everything was great."

The race was halted briefly under red-flag conditions on Lap 5 following a crash by Gerry Signorelli that left his bike on the front straight's racing line. Once the race resumed, however, so too did Barnes, who'd diced with Fillmore through earlier laps, and teammate Rapp, whose hurry to get off the line resulted in a jumped restart and an attendant five-second penalty.

Rapp, who also contended today's AMA Pro National Guard SuperBike race, continued to charge as quickly as possible once the track went green again, trying desperately to offset the penalty to whatever extent he could in the remaining laps. Although he was second across the finish line, however, the penalty bumped Rapp back to third.

AMA Pro Harley-Davidson Insurance Flat Track star Sammy Halbert made a special appearance in the class at Infineon Raceway and had an exciting weekend, embarking on an off-track excursion after the restart but soldiering on to take thirteenth place.

For tickets to or information about Round 2, Day 2, at Infineon Raceway, visit http://www.infineonraceway.com/.

Thanks to Halbert Brothers Racing on Facebook and Miriam Deitcher's Flat Track Live Facebook page for this great interview video of Sammy after his pro debut in yesterday's XR1200 race at Infineon: