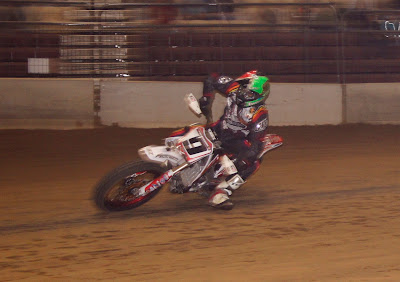 Jared Mees runs away during heat race #3 of the 2011 AMA Pro Flat Track Harley-Davidson Insurance Grand National Championship Series round three event held inside the Southern Illinois Center at the DuQuoin State Fairgrounds on April 16.  The #9 Montgomeryville Cycle Center/Lucas Oil/Rogers Lake Racing/Saddlemen-sponsored Honda CRF450R-mounted Mees went on to finish 4th in the main event of the DuQuoin Indoor Short Track promoted by Steve Nace Racing and presented by Four Rivers H-D on the day, and after rounds 4 & 5 at Salinas, CA. over the Easter Weekend sits 5th in the overall standings, going into the Memorial Day Weekend Doubleheader at the Illinois State Fairgrounds at Springfield this weekend.

With a week off after the Springfield events, Mees (a former AMA Horizon Award winner and '09 AMA Flat Track Grand National Twins Champion) and a host of other AMA Pro Flat Track regulars will be heading north to Wisconsin to contest the June 3-5 events, starting off with the 27th Annual Dairyland Classic held at the Sheboygan County Fairgrounds in Plymouth.  Mees is the 2-Time defending event winner in the event that also boasts previous winners including 3-Time AMA Grand National Twins Champion Kenny Coolbeth, Jr., Shaun Russell, Jethro Halbert and Joe Kopp just to name a few.

7-Time AMA Grand National Champion Chris Carr will be racing and is also scheduled for an autograph signing session at West Bend Harley-Davidson on June 2 from 6-8 P.M. as part of his 2011 Farewell to Flat Track Tour.

Wisconsin is definitely the place to be June 3rd – 5th if you love flattrack racing. With over $25,000 up for grabs, where else would a flattracker be?


The 27th Annual AMA sanctioned Dairyland Classic presented by Hoban Brothers will be kicking off this exciting weekend of racing on Friday, June 3rd at the Sheboygan Co. Fair Park. This event will offer a payout of over $10,000. Included in this is the Jim Sumner Dash for Cash with over $2,000 going to the top four finishers. Previous winners of the Dash include Jared Mees, JR Schnabel & Joe Kopp.

Saturday night will find the AMA sanctioned All Star National Flat Track Series returning to Wilmot Raceway located at the Kenosha Co. Fairgrounds in Wilmot, WI. After being rained out in 2010 everyone is anxious to test the ½ mile at Wilmot Raceway on June 4th.

The AMA sanctioned All Star National Flat Track Series was formed in 2010 to take the place of the AMA Hot Shoe Series when it was discontinued. Our goal is to provide AMA Pro & Expert racers venues to race at during the off weekends and in conjunction with AMA Pro Racing Grand National Championship Flat Track Series. As well as bringing the sport of Flat Track Motorcycle Racing to new venues and potentially new fans across the US.

Here's the link to the Dairyland Classic event on June 3:

This is a great look at the history of the Dairyland Classic in Plymouth, WI.: