AMA Flat Track: Looking at the Xs & Os & History of the Harley-Davidson XR-750 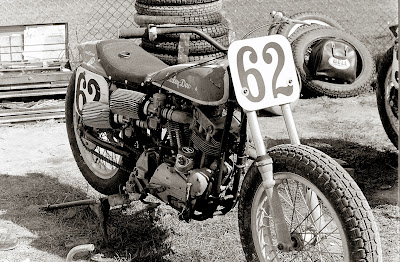 Cliff 'Corky' Keener rode this #62 Harley-Davidson XR-750 to the win at the Terre Haute Action Track Half Mile round of the AMA Flat Track/Camel Pro Series Grand National Championship in September of '74.  Camel had just come into the series as the sponsor for select events during the '74 season, and Terre Haute was the last event of the year with them paying out the 'big bucks' in terms of sponsorship for the championship.  The inaugural Camel Pro Series events were held at the Laguna Seca road race, the Hinsdale, IL. Santa Fe Short Track and the final race in Terre Haute.  Camel would go on to sponsor AMA Flat Track and Grand National Championship Series racing full-time under the Camel and Winston brands (early 80s) until into the early-mid 90s.

Keener's XR shown wasn't just any XR, but one that at the time was receiving H-D factory support as well as being wrenched and sponsored by 3-Time AMA Grand National Champion Bart Markel, a fellow Michiganite like Keener, and another of a long-line of Michigan Mafioso to have blessed the dirt tracks of America in The Rolling Thunder Show of AMA Flat Track Grand National Championship Series racing.
Keener and Markel had just hooked up together for the '74 season, and besides winning the Terre Haute event also teamed to win the Louisville Half Mile earlier in the year at Louisville Downs, of which Markel had also won at three different times while he was still an active rider in the championship.  Those two wins along with a series of runner-ups and top 5s and 10s saw Mr. Dirt end the season ranked as the 7th rider in the final year-end championship standings.
Not too bad for a guy that would turn 30 years old less then two weeks after his Terre Haute win.  And even without doing any road racing, Corky ended up ranked 3rd in the three race Camel Pro events behind Kenny Roberts (who clinched the overall and his 2nd AMA Grand National Championship and Camel Pro titles with a second-place finish at Terre Haute) and Dave Aldana on the #13 Factory Triumph, who got third in the three-race series as well as at Terre Haute that day in September. (The Terre Haute race had been rained delayed from over five weeks earlier in the season.  Even in those days Mother Nature played into the hands of the series' schedule!)

Having orignally been introduced as an iron barrel model during the 1970 racing season, the Harley-Davidson XR-750 was re-done by the '72 season due to 'maintenance' problems under duress and re-introduced as an alloy model.  At the end of it's first full year in competition, Mark Brelsford took the #87 H-D Factory XR to three race wins and the 1972 AMA Grand National Championship, and the model's first of numerous race wins and titles that are still going strong.  2010 AMA Flat Track Grand National Champion Jake Johnson won the overall and Twins Series Championships while riding Zanotti Racing XRs in the series, while also winning two Twins Series events (the May Springfield Mile and season-ending Prescott Valley Mile in October) adding to the brand's long range dominance in the sport.

Looking back at the origins of the H-D XR-750, the weapon of choice for decades in The Rolling Thunder Show, Mark Gardiner, who many remember as Mr. Backmarker from the now defunct Road Racer X Magazine and Road Racer X.com, reviews this iconic model and it's beginnings from decades gone by.

Thanks to Mark for this great piece of history.  Great stuff as always from the man who raced the Isle of Man and wrote his memoirs of doing so titled 'Riding Man.'  Mark is another fine industry journalist who does a great job of keeping abreast of the history of racing (and the industry as a whole!) that you should be reading regularly.  Check out this great story here:

You can also check out more of Mark's great columns here thanks to AMA Pro Flat Track.  Look for his 'Notes From the Blue Groove' columns here:

The AMA Motorcycle Hall of Fame Museum look at an iconic H-D XR-750 that was ridden by '69 AMA Grand National Champion Mert Lawwill while he was with the Harley-Davidson Factory Racing Team.  This one holds some lore due to the fact that Lawwill was known to go through his factory mounts and perfect them even more then what they already were as provided by the factory team.  Great reading here: