Donington (UK), 12 May 2012 - Tom Sykes (Kawasaki Racing Team) went over 0.3 seconds faster than the existing track best in the third Superpole run, with a 1 minute 27.716 second lap that gave him his fourth Tissot-Superpole win of 2012. Close behind was his fellow Englishman Leon Haslam (BMW Motorrad Motorsport), the only other rider inside the 1’27 bracket. 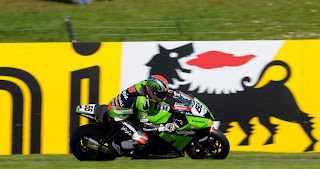 
Tom Sykes: “It’s always nice to tick these things like Superpole wins off my check list, but having said that I wasn’t expecting to be so fast. I was missing a bit of feeling with the ZX-10R but we kept working in Superpole 1 and 2, making some very small changes and finally in Superpole 3 those changes made all the difference. I’m confident with the race set-up, and hopefully we can have some good consistent weather and put on a good show for spectators. It was also nice to get the pole award from Roger Burnett, the first-ever WSB poleman; 25 years on it’s happened to me!”


Leon Haslam: “We had similar problems to Marco, the race tyres were working really good and the Qs were struggling with a bit of chatter but had a lot of grip. We decided to use a Q right at the end, but I made a big mistake and it was really close between me and Tom. He keeps getting these pole positions, but I’m very happy to be on the front row and I’m sure it’ll be a close race tomorrow.” 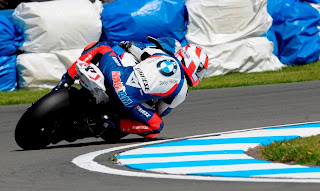 Marco Melandri: “I’m very happy because the team and the BMW factory have made a good job and to be on the front row in dry qualifying here after Monza is very important for us. I was happy about my race pace but wasn’t sure about my qualifying lap, but right from Superpole 1 I got a very good feeling. I was able to keep two qualifying tyres for the last Superpole but unfortunately had a bit of chattering with the first and the second didn’t work so well. Now I hope to be with Leon on the podium.”


Monza winner Jules Cluzel (PTR Honda) posted the fastest time in the second qualifying session to head the combined time sheets and take his first ever WSS pole with a 1 minute 30.931 seconds lap. This is the new best lap time in this class. Sam Lowes (Bogdanka PTR Honda) fell early in the session and was unable to improve on his first day best and thus he finishes second in the overall rankings. Broc Parkes (Ten Kate Racing Products Honda) made it a 1-2-3 for Honda riders, with Kenan Sofuoglu (Kawasaki DeltaFin Lorenzini) going fourth. Wildcard Glen Richards (Smiths Gloucester Triumph) was a strong top five rider, while Sheridan Morais (Kawasaki DeltaFin Lorenzini) posted a top six place. Fabien Foret (Intermoto Step Racing) suffered a bang on the head in a practice crash but still went out and improved his best lap to go tenth on the grid.