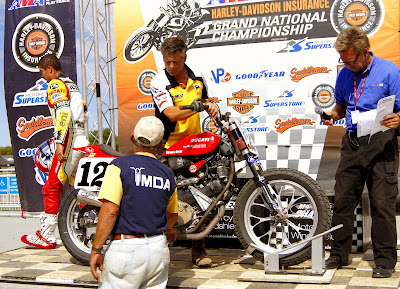 After winning the second semi at round 16 of the 2011 AMA Pro Flat Track Harley-Davidson Insurance Grand National Championship presented by Motorcycle-Superstore.com season at the Springfield Mile II on September 4, rider Brad Baker walks off of the podium after being interviewed by AMA Pro Flat Track announcer Barry Boone.  Team co-owner Mike Lloyd rolls the #12 Italian-based twin off of the stand while talking with one of the IMDA event people on-hand.

Baker took the Lloyd Brothers Motorsports/TeamHurtByAccident.com/Foremost Insurance/Nicky Hayden.com-sponsored machine to the win in the semi after leading Werner-Springsteen Racing's Shaun Russell and H-D of Salina's Steve Murray home to card the last three transfers to the Labor Day weekend event.

The Bullet would go on to card an 8th-place finish in the 26-lap, red flag-delayed final after suffering from debris in his eye just before the red flag was thrown.  He would also go on to garner the 2011 AMA Pro Flat Track Saddlemen Rookie of the Year Award after finishing 6th in the season-ending standings.

The Lloyd Brothers team had unofficially announced late last summer that 2011 rider Baker would be moving on for the 2012 season to ride for Kenny Tolbert Racing's new Kawasaki-based team, and it was announced 'unofficially' at the Indy Dealer Expo in February that Henry Wiles would be returning to the team for the upcoming Twins Series events, making Hammerin' Hank the third rider in as many years to take the seat of the big Italian twin.  Former 2000 AMA Grand National Champion Joe Kopp rode the team's machine in the 2010 season, carding them their first win at the Arizona Mile I in May and the first-ever win for the Italian marque in an AMA Grand National Twins Series event.

Wiles, who previously rode for the LBM team in the 2008 season and nearly scored their first GNC win for them on their Aprilia-based mount at the Lima Half-Mile, also rode for the team in the AMA Pro Road Racing Sun Trust Moto-ST Series while campaigning an Aprilia Tuono 1000R-based twin for the Ohio-based team.

We're looking forward to seeing them debut their new-for-2012 look in just 24 short days at the Springfield Mile I, round 4 of the 2012 AMA Pro Flat Track Harley-Davidson Insurance Grand National Championship presented by Motorcycle-Superstore,com season on May 27.

You can read the full press release below courtesy of the great guys from LBM!

“I tested with the team a couple of times this year,” commented Henry Wiles.  “We have a great group of guys on the team that are professional and work very well together.  The bike’s performance when testing was really solid. I am confident that it is capable of running at the front and winning.  I felt very comfortable on the bike while testing and I am really excited for this season.” 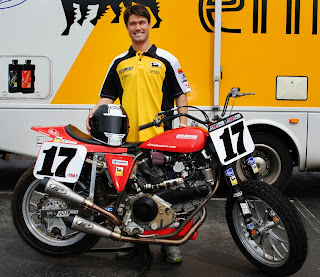 “Being involved in professional racing is an important aspect to Foremost and we are looking forward to a successful season with Lloyd Brothers Motorsports, Inc.,” says Randy Slotten, director of marketing for Foremost Insurance Group.  “We value our sponsorships and want to share our safety and product expertise with the racing community.”

“We are very proud of both product and financial participation from our sponsors. We are very confident in our ability to finish well in each event with the team and quality sponsors that we have assembled. It is going to be a fun year. ”  reports team co-owner David Lloyd.