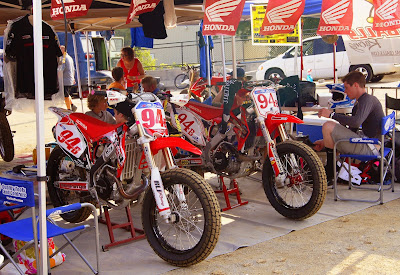 Weirbach Racing's Ryan Wells gets changed into some street clothes after setting fast time in the AMA Pro Motorcycle-Superstore.com Pro Singles Series class at the Springfield TT on May 26, during round 3 of the 2012 AMA Pro Flat Track Harley-Davidson Insurance Grand National Championship presented by Motorcycle-Superstore.com season at the Illinois State Fairgrounds.

The former AMA Horizon Award winner took the top honors in qualifying on the #94B Weirbach Racing/General Engineering/Barnett/Spectro-sponsored Honda CRF450R over a field of 75 Pro Singles riders taking a timed qualifying run, of which the top 32 made the cut for the evening.  Timing in at 24.467 seconds, just .081 seconds faster then current Pro Singles points leader and eventual Springfield TT winner Gerit Callies.

The Albion, NY resident showed high potential in his Springfield Pro debut over the Memorial Day Weekend, getting the holeshot and leading his heat race and ultimate re-starts until finishing in the 2nd spot to qualify for the Pro Singles main event, where he eventually got caught up in an on-track incident that forced him to settle for a 14th-place finish in Saturday evening's TT.

You can read Ryan and Weirbach Racing's press release below as we await round 5 of the 2012 AMA Pro Flat Track Harley-Davidson Insurance Grand National Championship presented by Motorcycle-Superstore.com season at the Lima Half-Mile on Saturday, June 30.

On May 26th, The Weirbach Racing team and I traveled to Springfield, Illinois to ride the Springfield TT.

Going into this event I wasn’t quite sure what to expect.  After finishing up the free practice I felt very comfortable on the track and bike and I knew I would be able to throw down a solid time during the two qualifying sessions.  After both of the timed sessions I was the fastest qualifier which was awesome.  This would put me on pole for the heat race, that is exactly what you wanted on this very technical track.

In the heat race I jumped out to the early lead and continued to pull away from the pack until about 3 laps to go when the red flag came out.  On the staggered restart I didn’t get the start I needed and ended up getting a very close second.

In the main I sat 4th on the front row.  Off the start I came out of the first turn in 3rd but made a slight mistake and l slipped back to 4th and about half-way through the red flag came out which was just what I needed.  I got a great jump on the restart and sent it in to the first turn hard getting up too 3rd once again but got hit from behind and ended up stalling the bike.  Had to salvage 14th place points that race but knew there was a long season ahead of us.

On May 27th, we traveled over to the Springfield Mile.

This was only my 2nd mile ever so I really wasn’t sure what to expect on this very fast and close racing mile.  After the first free qualifying session I realized this track was awesome and fast!  After the 1st timed session I was sitting about 12th which I was happy with.  The main thing I needed to work on was the draft.  After the 2nd session I set 5th fastest time which would put me on the front row in the heat race.

In the heat I jumped out to the early lead and led the pack for the first lap around.  After getting drafted and drafting back I ended up getting a 5th in the heat race which would put me back on the 2nd row in the main event.

This being my first pro main event on the mile I was a little nervous and not knowing what to expect.  After 16 laps of mile racing I ended up 10th place.  This wasn’t the best result but it put me in 3rd place in overall points and just 10 points behind the leader which made me happy.  I know some mistakes I made and some things I didn’t do that I know I should come September when we travel back to Springfield.

With 3 weeks until the Lima, Ohio half mile, I plan on training nonstop and racing nearly every weekend.

Of course none of this would be possible without all of my dedicated sponsors special thanks to them: