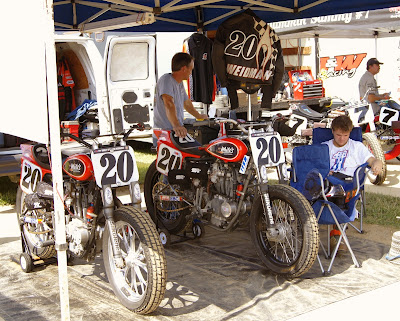 2008 AMA Pro Flat Track Saddlemen Rookie of the Year Matt Weidman looks over his notes during the break in the on-track action at round 11 of the 2011 AMA Pro Flat Track Harley-Davidson Insurance Grand National Championship presented by Motorcycle-Superstore.com season at the I-96 Speedway Half-Mile in Lake Odessa, MI. on July 23.  Matt's Dad, Guy, takes a breather in between the team's #20 White's Harley-Davidson/SNIP/Shoei/Silkolene-sponsored XR750s.

With Mom (Rachel) and Dad having retired from the long and hard grind of the circuit at the end of the 2011 season, Matt will be going it alone without the long-time help of his family and faithful at-the-track supporters for the 2012 AMA Pro Flat Track season.  After finishing in the highest spot in his four year career with an 8th-place finish in the overall season standings, Matt has steadily improved over the course of his young career in every season of competition.  During the 2010 season, Matt finally got that long-awaited and hard-fought podium with a 3rd-place finish at the Lima Half-Mile in late June, bettering his finish at the same track by coming home 2nd behind winner Sammy Halbert in the 2011 season.

Matt started off the 2012 AMA Pro Flat Track Harley-Davidson Insurance Grand National Championship presented by Motorcycle-Superstore.com season with a career-equal 2nd-place finish at the season-opening round at Daytona back in March, finishing a close runner-up to first-time winner Johnny Lewis.  Proving that he has had it in him from the day he first turned Pro, in round 2 the next evening at Daytona Matt finally nailed that elusive first-time win in front of a big crowd at the World Center of Speed.

With rounds 3 & 4 scheduled for this weekend (May 26-27) at the Illinois State Fairgrounds, Matt just made the official announcement that he won't be completely alone in his quest to win the AMA Grand National Championship, by announcing he will be sponsored for the remainder of the season by DFW Honda in the Singles Series events and will that he also will be teaming up full-time with GCR to ride their H-D XR750s in the 11 Twins Series events.

This is great news for the New York State resident, who is one of the hardest working and most approachable people in The Rolling Thunder Show.  Congrats to Matt and we can't wait to see him twist it up at the Springfield TT and Springfield Mile I rounds over the Memorial Day weekend coming up.

You can read the full press releases below thanks to Matt, DFW Honda and Greg Crow Racing!


DFW Honda, located in Grapevine, Texas next to DFW Airport (hence the name-DFW Honda) has been owned by Mark Lamb since 1994.  The dealership has a history of supporting various types of racing such as: Motocross, Cross Country, Baja, Enduro and of course, Flattrack.  DFW Honda sponsored top riders like Chris Carr and Terry Poovey.


Mark Lamb told Matt that he wished he had been a part of Matt’s Daytona 2nd place Podium and 1st Place Victory, but is happy he will see DFW Honda on the CRF 450 Shrouds- as the primary sponsor for Matt’s Singles Program for 2012.  Matt recently picked up his brand new DFW 2012 Honda CRF450R and is getting it race ready for the next AMA Pro Flat Track Singles Series round at the Springfield TT. 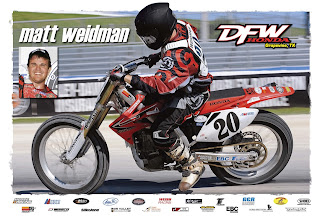 Matthew has a great deal of respect for Chris Carr, taking his #20- to follow in Carr’s shoes as a young pro and is pleased to be working with Carr’s ex-Sponsor, now that Chris is retired from racing.  Matthew has been financially responsible for his race program for the past two years and is very grateful and excited for this sponsorship opportunity.  Geremy Crow will be Matt’s mechanic at the AMA Pro races, while Dave Koban, who has been Matt’s engine builder since the KX60 days will continue to build his 450 motors.


If you live in the state of Texas, or are just passing by, stop in and visit Mark and the whole crew at DFW and check out their spectacular Honda Powerhouse Dealership.  Also, if you are a fan of Flattrack, remember to thank Mark and his family when you see them at the races, (they attend several of the GNC races each year) for the support they give to Flattrack racing.

Matt Weidman #20 is shown in action on the way to winning his first-ever AMA Pro Flat Track National main event at round 2 of the 2012 season at the Daytona Short Track.  Promotional photo courtesy of Matt Weidman.


Greg Crow has been involved in racing for almost 40 years as rider, mechanic, engine builder, team owner- you name it- he’s done it!  In 2005, he purchased a Dirttrack Team from longtime friend and sponsor, Steve Gardner.  Geremy Crow, now 29 yrs. old, has been in mechanic training his whole life and is being groomed by dad to take over as the team’s tuner.

He currently works for Reiman’s Harley Davidson during the weekdays and on weekends can be seen at the track.  He has been his brother’s (Dustin) mechanic both in Motocross and Dirttrack for many years.  Dustin has been racing many years; he started in Motocross and then switched to Dirttrack several years ago and earned his grand national number, #61.  Dustin is a big help to the team off the track, working in the garage preparing bikes along with brother and father, making this a true family team who loves motorcycle racing.

The final member of the CGR team is Tort, who has been Greg’s lifelong friend as well as his mechanic years ago.  Tort works with the others in the garage all week and usually can be seen driving the GCR Truck to the races. 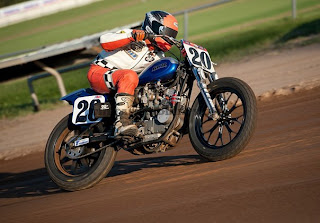 Matt Weidman is shown in action at the Canterbury Park, MN. mile event during the 2010 AMA Pro Flat Track season on board one of the GCR Harley-Davidson XR750s.  Promotional photo courtesy of Matt Weidman and GCR.

Steve Beattie has also been a long time friend of the Crow family and contributes to their overall success as he helps with suspension, bike set up, etc.. Steve has been a mentor to Matthew, racing with him since Matt was a 14 yr old Pro in Canada, while teaching Matt how to finesse a Harley XR750 around the Canadian Cushion Tracks.

At 20 years old, this will be Matt’s 5th year as a GNC Expert Pro and he remains the youngest rider in history to advance through the tree tiered system from Pro Sport -to Expert -to GNC, while still just 16 years old.  He won Rookie of the Year his first year as a GNC Pro and has finished top ten in the twins points every year since.  He has ridden for his parents on their Harleys for the past few years and now that mom and dad have retired from the racing scene, he is on his own.


Matthew rode the GCR Harley at the Minnesota Mile in 2010 and had his best ever Mile finish- 5th place.  The GCR Team and Matt worked very well together and have talked the past couple seasons about racing together full time.

Matt will ride for GCR this year on their Harley XR 750 twins and Geremy Crow will also be Matt’s mechanic at the singles races, while he rides the DFW Honda CRF450Rs.  Geremy, along with the rest of the GCR Team enjoyed their first Victory with Matthew in Daytona.

White’s Harley Davidson, owned by Joe and Donna White is the team's Harley sponsor and they are excited to once again help Matthew with his Twins program.

Check out www.mattweidman.com as well as www.whitesharley.com for more information.