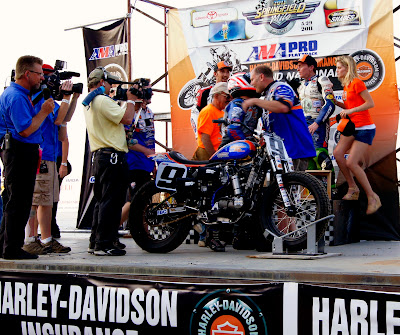 The MavTV cameras roll as the podium ceremonies get ready to begin at round 6 of the 2011 AMA Pro Flat Track Harley-Davidson Insurance Grand National Championship presented by Motorcycle-Superstore.com season at the Springfield Mile I on May 29, as new-event winner Jared Mees climbs off his H-D XR750 and is greeted with a hug from his crew chief, Brent Armbruster.

AMA Pro Flat Track announcer Barry Boone (far left) describes the excitement on the podium for the wealth of fans who waited out the rain delay and saw Mees take his #9 Rogers Lake Racing/Blue Springs H-D/Saddlemen/Lucas Oil-sponsored mount to his first win at the Illinois State Fairgrounds mile oval, and his first in the series in almost four years of competition.  Runner-up Sammy Halbert and 3rd-place finisher Jake Johnson carry on their own conversation in the background while things get settled in for the winning ceremonies.

Jammin' Jared's sponsor, Lucas Oil, has been involved with motor racing in general for decades, and has been with The Jammer for several seasons now.  One of the higher-profile sponsors in the series, the Forrest Lucas-owned company has been a mainstay in the AMA Grand National Championship for several seasons sponsoring, among others, the Lucas Oil Indy Mile event.  They are also the title sponsor for Lucas Oil Stadium in Indianapolis, home of the Indianapolis Colts NFL team, and are the 2nd year owners of the naming rights to Lucas Oil Raceway at Indianapolis, home of the NHRA U.S. Nationals.

With Lucas' recent acquisition of MavTV (the men and sports TV network that has covered AMA Flat Track for the last couple of seasons), the word has been mostly positive in that their continued support within the series would continue, and continue to grow.  Their announcement today with AMA Pro Flat Track that they would also be partnering with NBC Sports (formerly Versus TV) to carry some of the races on the schedule, is good news to those who know that a good television package is what is needed to help grow the sport further, let alone getting some of the fans back to the greatest sport on wheels in the world.

A big thanks to MavTV and Lucas Oil for their continued support of The Rolling Thunder Show.  You can read the full press release below to see which events are on the calendar to be broadcast this season.