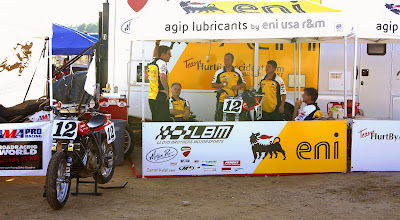 One of the hardest-working teams in the AMA Pro Flat Track Harley-Davidson Insurance Grand National Championship presented by Motorcycle-Superstore.com series is the Lloyd Brothers Motorsports team, but judging by this shot taken in between qualifying and the heat races at the I-96 Speedway in Lake Odessa, MI. on July 23, 2011, it could leave the casual observer thinking different.  But never take one short period of time or one instance to make you think otherwise, as these guys stay pretty busy, on the track and off.

Team co-owner Dave Lloyd, crew chief Dave Gamble, frame fabricator Lyle Pizzino of VMC Racing Frames, former AMA Grand National competitor and multi-time winner Kevin Atherton (now a team coach/set-up man for the team) and co-owner Mike Lloyd can be seen discussing the day's events, or at least up to the point of getting ready to get it in the show.

At a 'typical' AMA Pro Flat Track Grand National Twins Series event, the Ohio-based LBM team not only had to concentrate on getting their team's 'L'-twin machine set-up and ready for 2011 rider Brad Baker, but with the blessing of AMA Pro Racing also took it upon themselves to display and sell raffle tickets for one of AMA Pro Road Racing's Buell XB12XP pace bikes from the '09 season.  This not only entailed transporting and showing the machine off at the 11 Twins Series events throughout the season, but setting up the necessary display including awning, banner and greeting area in their pit area, to procuring the 1000 tickets that were made available for sale in last season's raffle.  (You can see last year's raffle bike in their pit area on the far left side of the shot.)

Of course, the raffle generated approximately $11.5K that was donated to the AMA Pro Flat Track/Road Racing World Air Fence fund, one of the largest donations of funds to go to saving lives by lining armco barriers and cement walls at some of the visited venues in high-impact areas.  And Lloyd Brothers Motorsports' Foremost Insurance sponsor also kicked in another big handful of cash to help grow the very needed and important stable of air fence for the flat track series.

Well there is good news for the 2012 AMA Pro Flat Track Harley-Davidson Insurance Grand National Championship Twins Series events, of which again their will be 11 of, as the LBM team will once again sponsor a raffle for another one of AMA Pro Road Racing's XB12XP pace bikes from the '09 season.  With last season's winner Eddie Relick of Bloomington, IN. having walked away with the big prize, he and everyone purchasing a ticket in the 2012 season will have another chance to take home an almost-new piece of racing history, thanks to LBM and AMA Pro Racing.

Tickets again will be $20/each and will be available at each event this season at the Lloyd Brothers Motorsports pit display (which you need to take the time to go check out, even if you can't afford the extra $20 to purchase a ticket.  These guys eat, breath, sleep and work flat track racing, and talking with them is a real pleasure in itself when you see the passion they have for the sport.)  However, other then the Aid to Injured Riders (AIR) fund, the air fence fund is one of the finest and best things you can do to help give back to the greatest sport on wheels in the world.

The first tickets will be available for sale at round 4 of the 2012 AMA Pro Flat Track Harley-Davidson Insurance Grand National Championship presented by Motorcycle-Superstore.com season at the Springfield Mile I event on Sunday, May 27.  If nothing else take the time to go and talk with the LBM team during the fan-walk and take a look-see at the bike.  I can pretty much guarantee they won't be just 'standing and sitting around' like they were when I caught them in this rare moment last season.  And they'd love to talk with you about flat track racing and their passion for helping to keep on promoting this great sport.  And tell them Stu's Shots sent you!

You can check out the official press release below thanks to LBM and AMA Pro Racing!

Also, a very special thanks and tip of the helmet to team co-owner Dave Lloyd for taking the time to talk with me this afternoon during his very busy schedule.  You guys rock, Dude!﻿


DAYTONA BEACH, Fla. (May 17, 2012) - Lloyd Brothers Motorsports, Inc. with support from Foremost Insurance Company, Saddlemen and AMA Pro Racing is pleased to announce participation in an exciting fundraiser for the Roadracing World Action Fund. Throughout the 2012 AMA Pro Flat Track season, the Lloyd Brothers Motorsports team will be volunteering efforts to raise money for the Roadracing World Action Fund, a 501(c)3 not-for-profit organization which advocates and promotes the use of soft barriers to help prevent rider injuries at racetracks.


The first-prize winner of the fundraiser will receive a 2009 Buell Ulysses XB12XP - AMA Pro Road Racing Pace Motorcycle, donated by AMA Pro Racing, and the second-place prizewinner will receive a new custom Saddlemen seat donated by Tom Seymour of Saddlemen. The motorcycle will be transported, displayed and have tickets sold by Lloyd Brothers Motorsports at each of this season's half-mile and mile AMA Pro Flat Track races.


"The safety of our competitors is of paramount importance to us, and a key to building the sport of flat track racing," said Dan Johnsen, Director of Flat Track for AMA Pro Racing. "We are very thankful for the commitment and support that Lloyd Brothers Motorsports has shown to our paddock by taking part in a second consecutive year of fundraising in support of the Roadracing World Action Fund."


"We are excited to continue to help raise funds for flat track Airfence," stated Lloyd Brothers Motorsports co-owner Michael Lloyd. "Airfence is invaluable to the safety of racers. We are really hoping that the racing community will continue to rally around this cause so that we can expand the amount of Airfence available for the safety of our racers."


There will be 1,000 tickets available. Tickets will be sold at each AMA Pro Flat Track half-mile and mile event for $20.00 each and the winners will be drawn and announced in front of the grandstands at the final race of the season.

Donations can also be made via the Lloyd Brothers Motorsports website: http://www.lloydbrothersmotorsports.net/airfence.htm


Winners do not need to be present at the time of the drawing; they will be notified after their ticket is drawn. To learn more about Airfence or to donate directly to the Roadracing World Action Fund, please visit http://actionfund.roadracingworld.com/.


About the Roadracing World Action Fund:


The Roadracing World Action Fund (http://actionfund.roadracingworld.com/) is a 501(c)3 not-for-profit organization which advocates and promotes the use of soft barriers to help prevent rider injuries at racetracks. Since it was founded in 2001, the Roadracing World Action Fund has raised approximately $900,000 in donations used to deploy Airfence.