Weather intervenes as Sykes wins his first of 2012


Monza (Italy), Sunday 6 May 2012 – Thanks to poor weather conditions that came and went all day at Monza the first race had to be cancelled and only one SBK contest took place, which was then unavoidably shortened to half distance. On a day of uncertainties and unpredictable track conditions Tom Sykes (Kawasaki Racing Team) provided an emphatic win out of all proportion to the short eight laps the race lasted before the rains came back to spoil the party yet again. His margin of victory was 9.709 seconds, more than a second per lap faster than his main rivals in damp but drying track conditions. An overall crowd figure of 85,000 was recorded at the Autodromo Nazionale for this weekend’s event. 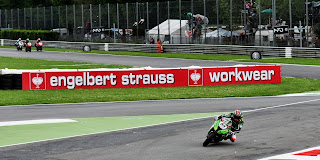 Tom Sykes took his #66 Kawasaki Racing Team ZX-10R to a convincing win in the only World Superbike race held at Monza, Italy on Sunday May 6, 2012.  The first race of the weekend was canceled due to unfavorable weather conditions, and the second race had to be shortened due to worsening conditions.  Photo courtesy of the SBK World Championship.

Tom Sykes: “There’s been a lot of commotion today, but to get the win for Kawasaki and the ZX-10R is great for us. The bike was awesome in the race, there were a lot of damp patches, but I had such good feedback I was able to get my head down and go about business in a good way. It’s a shame the race couldn’t go two-thirds distance but, hopefully now we can move on to a very sunny England and have some consistent weather for a change!.”

Leon Haslam: “I think we made the best of a bad day, 14th on the grid wasn’t ideal. It was quite difficult to overtake coming off the dry line, but it worked out perfect. We managed to get second, Tom was too quick from the get-go and by the time I got second he had already gone. A big credit to BMW, I’m happy to just get back onto the podium.”


Eugene Laverty: “We’ve been strong all weekend here at Monza in these conditions but I think we’re all just relieved to get that race over. I’m happy to be on the podium, home safe and sound. When I saw Leon go in front of me because he’s very experienced, I was happy to follow him and let him lead the way because there were some damp patches. Pleased for the podium after a tough day.”

As the race was so short, but beyond the lap count that would mean a restart, only half points were awarded to all the top 15 finishers. Tissot-Superpole winner Sylvain Guintoli (Effenbert-Liberty Ducati) looked like he would be the man to challenge Sykes but his bike stalled on the final warm-up lap and he could not get back to the grid in time to make the start. Leon Haslam (BMW Motorrad Motorsport) and Eugene Laverty (Aprilia Racing Team) headed up a warring group of six potential podium riders, with Max Biaggi (Aprilia Racing Team) fifth and Carlos Checa (Althea Racing Ducati) seventh.


Sykes is the fifth different race winner of the year and race victories have now been taken by Aprilia, Ducati, Honda and Kawasaki riders, after only seven individual race finishes.


Jules Cluzel (PTR Honda) won what was only his fourth ever Supersport race, in wet conditions at Monza. He finally held off an exciting late challenge from Sam Lowes (Bogdanka PTR Honda) who passed him going into the final corner, but was forced wide to allow Cluzel to duck inside and claim the prize. Some way back, Kenan Sofuoglu (Kawasaki DeltaFin Lorenzini) was a safe third, ahead of the impressive wet-weather abilities of Imre Toth (Racing Team Toth). Fifth was wild card rider Stefano Cruciani (Puccetti Racing Kawasaki Italia). 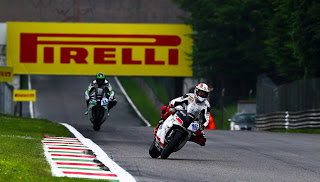 In only his fourth-ever World Supersport Championship race, Jules Cluzel took his #16 PTR Honda CBR600RR to the win at Monza, Italy on Sunday May 6, 2012.  Photo courtesy of the SBK World Championship.﻿


Lorenzo Savadori (Barni Racing Team Italia) took the all-new Ducati 1199 Panigale to its first win in this class of racing, on a drying track at Monza. With the previous championship leader Sylvain Barrier (BMW Motorrad Italia GoldBet) falling late in the race the championship lead was taken over by Savadori, who has 53 points to Barrier’s unchanged 50. Christoffer Bergman (BWG Racing Kawasaki) was an impressive second, only 1.65 seconds behind, with Eddi La Marra (Barni Racing Team Italia) right behind him. Fabio Massei (EAB Ten Kate Junior Team) was fourth in the 11-lap race with Marco Bussolotti (SK Energy Racing Team Ducati). With his third place La Mara is now only five points from the leader Savadori and two behind Barrier. 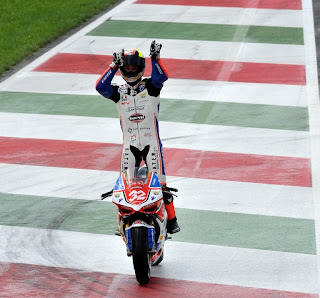 Lorenzo Savadori took the #32 Barni Racing Team Italia Ducati 1199 Panigale to it's first-ever win in the Superstock 1000 round at Monza, Italy on Sunday May 6, 2012.  Photo courtesy of the SBK World Championship.


Riccardo Russo (Team Italia FMI Yamaha) won the Superstock 600 class in fully wet conditions on his R6, after a deluge of rain forced the start of the race to be put back as full rain tyres were fitted. It was his second win of the year. Gauthier Duwelz (Team MTM Racing) was second on another Yamaha with the first Honda home being the EAB Ten Kate Junior Team CBR600RR of Bastien Chesaux. Michael van der Mark, Chesaux’s team-mate, was fourth and only 3.5 seconds from Russo.


The reappearance of fierce rainfall during the second lap of the KTM European Junior Cup at Monza brought out the red flags and the delayed race was subsequently cancelled in the interest of rider safety.