Fabrizio gets his BMW flying in first Monza qualifying session

Monza (Italy), Friday 4 May 2012 – Michel Fabrizio (BMW Motorrad Italia Gold Bet) led home a BMW 1-2-3 at Monza in the first qualifying session, thanks to a 1 minute 42.325 second lap set with only three minutes of the session remaining. He had earlier equalled the best top speed in SBK history when he clocked 334.8 km/h down the main straight. Another Italian, Marco Melandri (BMW Motorrad Motorsport) was second fastest and Leon Haslam (BMW Motorrad Motorsport) third.

The Friday reign of the S1000RR at the fastest circuit on the calendar was only challenged by the Aprilia Racing bike of Eugene Laverty, who was fourth in the overall rankings. BMW Motorrad Italia Gold Bet rider Ayrton Badovini posted the fifth best lap time, one place up on Tom Sykes (Kawasaki Racing Team). Local great Max Biaggi went seventh for Aprilia Racing, while the third Aprilia in the field in 2012, the ParkinGO MTC Aprilia of Chaz Davies, ended up in eighth place, making him the last rider to lap within a second of the top spot. 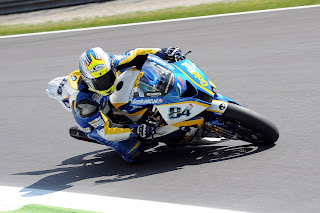 Michel Fabrizio is shown on the #84 BMW Motorrad Italia Gold Bet machine during day one activities at Monza on Friday, May 4, 2012, where he led all chargers at the end of first round qualifying.  Photo courtesy of the SBK World Championship.

As expected the Ducati riders found themselves outgunned at this particular circuit with 2011 champion Carlos Checa (Althea Racing Ducati) only ninth and his team-mate Davide Giugliano tenth. 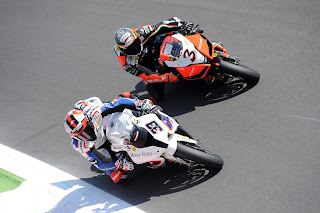 Marco Melandri on the #33 BMW Motorrad Motorsport and Max Biaggi on the #3 Aprilia Racing Team are shown during day one on-track activities at Monza on Friday, May 4, 2012.  Photo courtesy of the SBK World Championship.


Sam Lowes (Bogdanka PTR Honda) left it until the very last opportunity to record a lap time that gives him provisional pole after the first qualifying session at Monza. His lap time of 1 minute 47.601 seconds equalled – to the same 1/1000th of a second - the track best, originally set by Eugene Laverty in 2010. Kenan Sofuoglu (Kawasaki DeltaFin Lorenzini) got to within 0.437 seconds of the previous best lap at Monza as he took the second fastest lap of the first qualifying session. A strong day of work for the Kawasaki riders behind Lowes put Sheridan Morais (Kawasaki DeltaFin Lorenzini) and Fabien Foret (Kawasaki Intermoto Step) third and fourth respectively, while wild card rider Stefano Cruciani (Puccetti Racing Kawasaki Italia) was an impressive fifth against the series regulars. 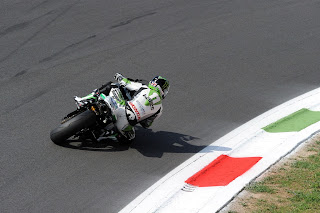 Sam  Lowes on the #11 Bogdanka PTR Honda CBR600RR headed up the leaderboard in day one qualifying in the World Supersport Championship.  Photo courtesy of the SBK World Championship.


Sylvain Barrier (BMW Motorrad Italia GoldBet) set the provisional pole time at Monza, very close to the track best, with a 1 minute 46.340 that kept him ahead of Lorenzo Savadori (Barni Racing Team Italia). Barrier’s team-mate Lorenzo Baroni (BMW Motorrad Italia GoldBet) pushed his way to third, one place ahead of Savadori’s team mate Eddi La Marra (Barni Racing). A late charge from Bryan Staring (Team Pedercini Kawasaki) made him the top ZX-10R rider on display, fifth, with Christoffer Bergman (BWG Racing Kawasaki) right behind. Barrier was injured in a fall during the session and was declared unfit but he will go under medical review in the morning.


Riccardo Russo (Team Italia FMI Yamaha) and his team-mate Luca Vitali stormed to the top of the first qualifying session at Monza, ahead of lap record holder Nacho Calero Perez (Team Trasimeno Yamaha). On a good day for R6 riders Franco Morbidelli (RCGM Team Yamaha) put himself fourth in a session that was red flagged and had to be restarted to complete the final six minutes of qualifying time. The first Honda rider home in the opening qualifying session was top all-round competitor Michael Vd Mark (EAB Ten Kate Junior Team Honda). Tony Covena (Team GOELEVEN Kawasaki) proved to be the top Kawasaki rider on show, seventh and 0.6 seconds behind the lead at this early stage.


Adrian Pasek took the honours in the first outing for the European Junior Cup class riders, a category in which all the riders are on identical KTM Duke 690 single-cylinder machines. Joshua Harland from the UK posted second and like Pasek his was a result taken very near the end of the session. Previous leading rider Jean-Francois Demoulin, from France, was third. Lukas Wimmer from Austria went to fourth in the first session, with the top five rounded out by Spanish competitor Javier Orellana. Kevin Chili, son of SBK legend Pierfrancesco Chili, was placed sixth.