Smrz scores his first pole of the season


Miller Motorsports Park (USA), Sunday 27 May 2012 - Jakub Smrz (Liberty Racing Team Effenbert Ducati) scored his first Tissot-Superpole win of the season after setting a lap time of 1 minute 47.626 seconds in the last of three sessions. It was his second career pole position in this class, following the one he obtained back in 2009 at Misano. Despite a few spots of rain appearing on the riders’ visors during a dry Superpole contest Smrz rode with full pace right at the end to earn the perfect starting place for Monday’s two SBK races.


Carlos Checa (Althea Racing Ducati) was second quickest and would have been on pole but for the late push put in by Smrz, a rider who has stamped his authority on the practice sessions since the start of the weekend. Tom Sykes (Kawasaki Racing Team) posted third best time, with the front row places competed by Checa’s team-mate Davide Giugliano, the Italian looking at ease on his first visit to Miller.


Jakub Smrz: “I am very happy to take the pole because in all the practices we have been doing a good job and my bike has been perfectly prepared. I had a small crash in free practice but we got the bike back in time for Superpole and I am happy that we should have good pace for the races tomorrow.” 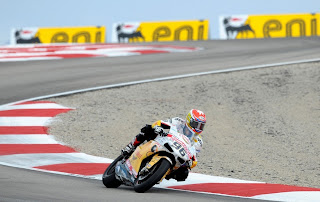 Jakub Smrz took the #96 Liberty Racing Team Effenbert Ducati 1098R to his first Tissot Superpole of the season during Sunday's action at round 6 in Tooele, UT.  Photo courtesy of the SBK World Championship.


Carlos Checa: “I am quite satisfied and I think we did a good job for the race and for the qualifying as well. Smrz was very fast because I expected to take pole position but at the end he went faster and congratulations to him. We got a start on the front row, I feel quite comfortable and I think the sun will arrive. We have had many wet races and sessions this year and this track is pretty nice in the dry, so hopefully tomorrow it will be good weather.”

Defending World Superbike Champion Carlos Checa is shown in action on the #7 Althea Racing Ducati 1098R at Miller Motorsports Park on Sunday where he qualified second in the Superpole session.  Photo courtesy of the SBK World Championship.

Tom Sykes: “I’m surprised to be on the front row because we have been struggling here at Miller. Once again the guys have done a great job because we changed something for Superpole to try and make something happen and fair play to the Kawasaki team because on the first lap on a race tyre I knew we had a lot better package.”


Davide Giugliano: “It’s my first time here and when I arrived at Miller, I went around in the car and could immediately see it was a great circuit for me and I really like it. So far the bike has never been as good as it was today but as long as it goes like this, then things are looking good.”


Marco Melandri (BMW Motorrad Motorsport) qualified ninth after just failing to get into the final Superpole 3 session. His team-mate Leon Haslam failed to make it out of Superpole one and qualified on the fourth row, in an unlucky 13th place. Leon Camier (FIXI Crescent Suzuki) missed out on Tissot-Superpole qualifying but his team-mate John Hopkins was 16th.


The Utah USA Round will have the honour of being the venue for the 600th race in World Superbike, which this year is celebrating its 25th anniversary. 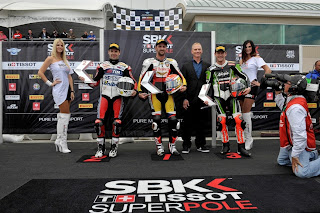