Monza (Italy), Saturday 5 May 2012 - Sylvain Guintoli (Team Effenbert-Liberty Racing) made the best of the continuing difficult and changeable track conditions at Monza to record his first ever Tissot-Superpole win. At a circuit that was not expected to favour the twin-cylinders this was a surprise result to most but Guintoli richly deserved his pre-race success after a gamble to use a slick rear tyre on a slowly drying track paid off. 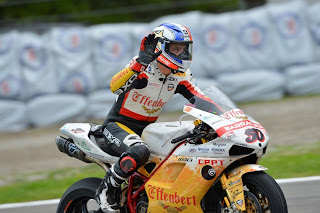 Tom Sykes (Kawasaki Racing Team) was unable to quite reach the level of Guintoli, as he failed to win the pole prize for the first time this year, but in the final free qualifying session he used the slipstream provided by another rider to take his ZX-10R to a new record top speed in SBK history, 339.5 km/h, which equates to over 210mph.


A wet Superpole was called which meant that there would be only two sessions, each of 20 minutes duration, with the slowest eight riders eliminated after the first session. As soon as the first part started bright sunshine dried the wet track, particularly on the main straight, but further small showers were evident around the lap before the finish. 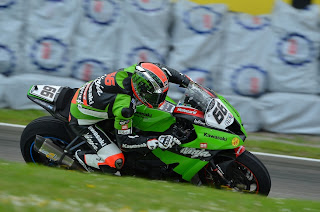 Tom Sykes on the #66 Kawasaki Racing Team ZX-10R put his mount into the second spot in Superpole and set an all-time speed record of 210mph along the way today at Monza, Italy.  Photo courtesy of the SBK World Championship.


Sylvain Guintoli: “First pole for me and in difficult conditions! Unlike Tom and Marco I’m hoping for rain tomorrow, I’ll probably do a dance before the race. Today I had to take a lot of risks, I decided to go with the slick tyres and some corners were still wet, so it was quite dangerous and the last lap was very exciting. I thought Tom had enough watches now and I could do with one for my wife!”


Tom Sykes: “We’ve done a good job over the race weekend, we’ve got a good consistent race pace, and hopefully it’ll be dry. Today it wasn’t to be; we got outpaced by the ‘snails’, but I’m looking forward to tomorrow. Obviously it’s great for the Kawasaki to be so fast, I had fantastic drive from the exit of the Parabolica and who better but Max to be directly in front, I had a lot of help from him! Setting a new record is just a little bit extra for the books!”


Marco Melandri: “For sure it’s a good result, it’s been such difficult weather. I’m happy now because after Assen I was a bit worried about the wet conditions. BMW made a good job, the bike is working better and it’s nice to be on the front row. We got a new engine one month ago and it’s working pretty good here. I hope the weather will be a bit more stable. I hope to give a good race to Silvano (Galbusera) who is not here today.” 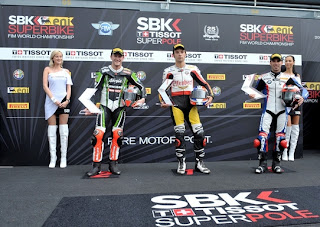 Tom Sykes, Sylvain Guintoli and Marco Melandri celebrate after placing in the top-3 in the 'wet' Tissot Superpole qualifying round today at Monza, Italy.  Photo courtesy of the SBK World Championship.


The second row of the grid for Sunday’s races will be headed by Jonathan Rea (Honda World Superbike Team) with Max Biaggi (Aprilia Racing), Jakub Smrz (Liberty Racing Team Effenbert) and Davide Giugliano (Althea Racing Ducati) alongside him. John Hopkins (Crescent FIXI Suzuki) and Eugene Laverty (Aprilia Racing) completed the top ten after just missing out on qualification for Superpole 2, but the most disappointed rider on the day was local man Michel Fabrizio (BMW Motorrad Italia Gold Bet) who had been fastest in combined qualifying but only 11th after Superpole. The last place on the third row was taken by Leon Camier (Crescent FIXI Suzuki).


The white flag with a diagonal red cross that signifies rain on track was a near constant sight on the second day of action at Monza and thus Sam Lowes (Bogdanka PTR Honda) took pole thanks to his Friday best time. It was his third straight pole position of the year, only missing out in the first round in Australia. With lap times over two minutes in the second qualifying session none of the riders improved in their opening day pace. Second on the grid for Sunday’s race will be Kenan Sofuoglu (Kawasaki DeltaFin Lorenzini) who will be close to his team-mate Sheridan Morais. Another regular Kawasaki rider, Fabien Foret (Intermoto Step Racing) is fourth on the grid. Local rider Stefano Cruciani (Puccetti Racing Kawasaki Italia) takes fifth place, Roberto Tamburini (Team Lorini Honda) sixth.


Sylvain Barrier (BMW Motorrad Italia GoldBet) will start the Superstock 1000 FIM Cup race from pole position after the final session was conducted in fully wet conditions today and therefore his Friday lap time was the fastest of all. Second on the combined qualifying sheets is Lorenzo Savadori (Barni Racing Team Italia) while Lorenzo Baroni (BMW Motorrad Italia GoldBet) will get off the line from third sport on the grid, one place higher than Savadori’s team-mate Eddi La Marra (Barni Racing Team Italia).


The Superstock 600 race was postponed until Sunday, after the second Superbike race, after poor light, a flooded track and a lightning storm in very close proximity to the circuit made it unsafe to continue.