With the checkers literally just feet away after 25 hard-charging and rousing laps, Willie McCoy gets ready to celebrate by taking the win at the Springfield Mile I on his #59 Harley-Davidson of Wausau/Independence H-D/Tucker Rocky/Arai-sponsored H-D XR750 at round 4 of the 2012 AMA Pro Flat Track Harley-Davidson Insurance Grand National Championship presented by Motorcycle-Superstore.com season.

Wild Willie took the lead when it counted, coming off of turn 4 on the last lap as he split 2nd-place finisher Jake Johnson on the #1 Zanotti Racing/Schaeffer's H-D/Boughner Racing/Arai-backed XR750 and 3rd-place finisher Bryan Smith on the #42 Howerton Motorsports/Eaken Racing Kawasaki/Midwest Performance Hardware/Guts Wear-sponsored Kawasaki 650R-based mount, in Smith's debut on the Ricky Howerton-built and Howerton and Jeff Gordon-prepped machine.

Smith led 15 of the 25 laps, 5th-place finisher Johnny Lewis on the #10 Scott Powersports Kawasaki led at the stripe for 8 laps, with Johnson and McCoy taking the other go-arounds, and McCoy's being the one that counted at the end of the day.  4th-place finisher Jared Mees follows them to the line on the #9 Rogers Racing/Blue Springs H-D/Saddlemen/National Cycle-backed XR750. 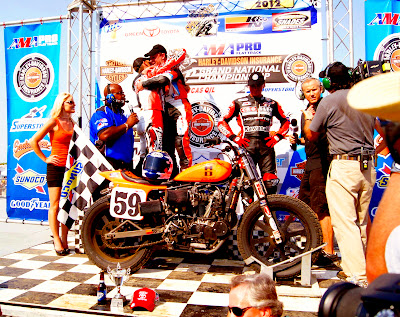 With Lucas Oil/MavTV announcer Kenny Sargent getting ready to do the interviews on the podium after the Springfield Mile I, 3rd-place finisher Bryan Smith looks down at the #59 Harley-Davidson of Wausau XR750 that winner Willie McCoy had just ridden to victory in his second-in-a-row at the Illinois State Fairgrounds mile oval.

And in a show of true sportsmanship and camaraderie that is rarely seen in any other sport other then The Rolling Thunder Show of AMA Pro Flat Track, 2nd-place finisher Jake Johnson gives a big hug and grin to his friend and fellow racer, Willie McCoy.

This picture truly helps to illustrate the family closeness and nature that is found in the greatest sport on wheels in the world and represents the friendly atmosphere that surrounds this great sport.  When a 2-Time and defending AMA Grand National Champion can smile from ear-to-ear and hug the guy that just beat him to the win in one of the biggest sporting events of the year in AMA Pro Flat Track racing, it really shows the family-friendly nature that is encountered throughout the pit area and track at these events.

A big congrats to Willie McCoy and to the rest of the great competitors in The Rolling Thunder Show, who again put it on the line to give us all a great event to see on Sunday, May 27.  Round 5 of the 2012 AMA Pro Flat Track Harley-Davidson Insurance Grand National Championship presented by Motorcycle-Superstore.com season sees the series head to the Allen County Fairgrounds in Lima, OH. for one of the best events and longest-standing dates on the calendar on Saturday, June 30.

You can read the full press release below thanks to AMA Pro Flat Track as we look ahead a little over four weeks for the Lima Half-Mile.