Miller Motorsports Park (USA), Saturday 26 May 2012 – Jakub Smrz (Liberty Racing Team Effenbert) pushed as hard in dry conditions as he had in the wet free practice session this morning to take the overnight fastest lap time of 1 minute 49.842 seconds. The man from the Czech Republic had been quickest in the wet opening session, after a thunderstorm had arrived at Miller at an inopportune moment. 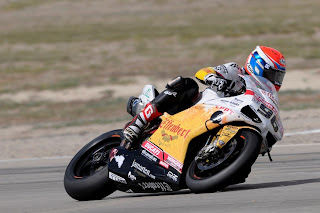 Jakub Smrz led the early practice session at the Miller Motorsports Park round on the #96 Liberty Racing Team Effenbert Ducati 1098R on Saturday.  Photo courtesy of the SBK World Championship.


Tom Sykes crashed out on his Kawasaki Racing Team official bike and was an unusually low ninth after the first qualifying session. The cosmopolitan nature of the championship was demonstrated fully as the FIXI Crescent Suzuki of Leon Camier took the English rider to tenth, making it all six manufacturers in the early top ten.


In his comeback ride from injury David Salom (Team Pedercini Kawasaki) was 15th after the first official session, while another rider making a return to the fray, local man John Hopkins (FIXI Crescent Suzuki) was ranked 17th.


The 24-strong field of riders will face a further qualifying session tomorrow morning and then the top 16 will go forward to Tissot-Superpole to determine their final grid positions.