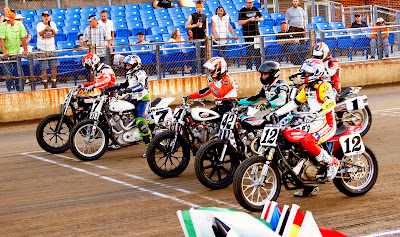 Round 6 of the 2011 AMA Pro Flat Track Harley-Davidson Insurance Grand National Championship presented by Motorcycle-Superstore.com season at the Springfield Mile I was met with a weather delay over the course of the annual Memorial Day weekend event.  Actually two delays, if you include the postponement of the Springfield TT (which was actually supposed to have been round 6, but was relegated to round 7 on Memorial Day itself.)  With having to wait for the mile oval at the Illinois State Fairgrounds to dry sufficiently after Saturday afternoon's rain deluge, the program was revamped and all of the 57 riders on-hand that took a timed qualifying session were allowed to go for one of the 18 slots open for the National main event.

When things were all done and said, after three heat races involving the fastest 48, a full field was set for the main event, and after 25 grueling laps at over 130+ MPH, Jared Mees had copped his first-ever win at the legendary facility in front of a great (and patient) paying house in attendance.

In the process of reworking the program to get all of the racing in, AMA Pro Flat Track made a great call to delay the Dash for Cash event until the day's main events were in the can.  But when the Dash was ready to roll off with the top-2 men from each heat race, those six riders were never more ready then at any other time when extra points and a few extra $$ were up for grabs in The Rolling Thunder Show.  And the various level of intensity and readiness is apparent in this shot as riders get ready to let 'er rip for four, fast and furious laps at the Springfield Mile.

As defending (and now 2-Time and defending) AMA Grand National Champion Jake Johnson rolls up to the line on the #1 Zanotti Racing/Schaeffer's H-D/Motion Pro-sponsored H-D XR750, the other five men show those levels of intensity and readiness.

Kenny Coolbeth, Jr. on the #2 Harley-Davidson Motor Co/Screamin' Eagle/Spectro Oils-backed XR750 takes a final look down at his mount, while eventual Dash winner Sammy Halbert appears to have his eye set on the starter as he awaits the flagman on his #7 Kings Kustoms/LZ Racing/KK Supply-sponsored XR.  7-Time AMA Grand National Champion Chris Carr makes a visor adjustment prior to hitting the hammer on his #4 American Motorcyclist Assoc/DFW Honda/Arai-backed XR in what will be his second-to-the-last event he runs at Springfield before retiring from full-time competition at the end of the season.

After sneaking by Sammy and Jammin' Jared in their heat race for the win, Bryan Smith showed that the coolness he is known for on the mile tracks was never more present in his first event running his #42 Moroney's Fasthog.com/American H-D/Rockysonline.com-sponsored XR after earlier in the season splitting from the Werner-Springsteen Monster Energy Kawasaki squad.

And in his first (of many) Dash events on a Twins machine, fast-man in qualifying and fastest heat race winner Brad Baker has the coolness of a cucumber as he readies to launch the #12 Lloyd Brothers Motorsports/TeamHurtByAccident.com/ENI USA-sponsored Ducati 'L'-twin.

There is no reason to believe anything different will arise this weekend as the IMDA gets ready to promote another super weekend of racing in the greatest racing series on wheels in the world at Springfield on Saturday May 26 (Springfield TT) and again on Sunday May 27 (Springfield Mile I) as the boys and girls of the 2012 AMA Pro Flat Track Harley-Davidson Insurance Grand National Championship presented by Motorcycle-Superstore.com season converge on the church of speed at the Illinois State Fairgrounds.

In what is the 30th anniversary of the return of the Springfield Mile (and what will be for now the final Springfield TT for the near future), the Illinois Motorcycle Dealers Association is ready to welcome all to the weekend of speed and will also be honoring all of our active military personnel as we take time to remember those who have been lost fighting for our freedom and our country.  They will also be offering discount tickets to active personnel who attend the weekend's festivities.

So if you haven't made your holiday plans yet, or if you have and you need to rearrange them in order to get your adrenaline fix, the weekend at Springfield is sure to please and fix the need for speed that so many of us have a major itch for.

You can read the press release below to get ready for The Rolling Thunder Show's return to Springfield, in what is the annual kick-off to a great summer of racing.

Released on Behalf of the Illinois Motorcycle Dealers Association (IMDA):