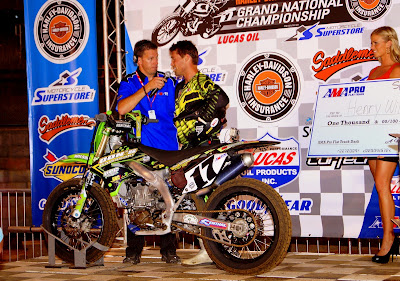 Round 3 of the 2012 AMA Pro Flat Track Harley-Davidson Insurance Grand National Championship presented by Motorcycle-Superstore.com season saw Henry Wiles atop the podium again after winning his fourth event in the last five outings at the Springfield TT event on Saturday, May 26.  Wiles missed the '11 event at Springfield due to injuries he sustained at round 3 at the DuQuoin Indoor Short track and his subsequent surgery needed to repair his left knee.

Riding the #17 Don's Kawasaki/DPC Racing/Nick Nazzisi/Schiller's Tree Service-sponsored Kawasaki KX450F, Hammerin' Hank again had a stellar evening at the Illinois State Fairgrounds in winning the Dash for Cash (shown on the podium talking with AMA Pro Flat Track announcer Scottie Duebler and receiving the ceremonial Dash check for $1000) and romping to the win in the National main by over 3.6 seconds over runner-up Jake Johnson and 3rd-place finisher Jared Mees, who finished just shy of .6 seconds back of Jersey Jake.

The 2-Time AMA Pro Flat Track Singles Champion made it look easy in taking the lead right from the drop of the green, stretching his lead over the dueling 'J's' throughout the 25-lap main event while even lapping riders towards the end of the just over 10 minute National.  With his fourth win on the TT at the Multipurpose Arena at Springfield, that brings Wiles' total of wins on the little track to nine events, to go along with his string of five straight short track wins ('07-'11.)  Add those wins together with his dominance at the Peoria TT and Wiles now has 16 wins on the small tracks in the Illini State.

Congrats to Henry for a great run from Saturday night, and you can read the full press release below from AMA Pro Flat Track.