Looking Down the Road at the 2012 MotoGP Rules Changes 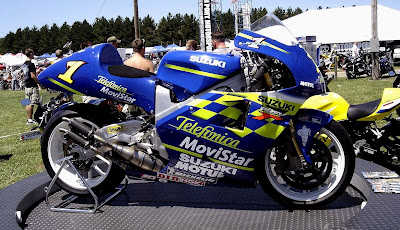 One of the best sites to keep up on MotoGP racing, if not THE best site, is David Emmett's Moto Matters.com. He runs a very informative and detail-filled site that helps to keep mere mortals like you and me up to date on the inner workings of the MotoGP World Championship, as well as his super coverage of the World Superbike Championship. During the course of the normal racing season David (as well as his great photographer Scott Jones) keep us informed on the happenings on and off the track, whether it be testing notes, rider and/or factory updates or full-blown 'you are there' race weekend coverage.

Unless you are a full-blown techno geek or motor-builder extraordinaire (of which I am neither-but that's another subject altogether!), then understanding rules packages for different racing series can sometimes be like trying to decipher Chinese arithmetic. And many times just as frustrating. And with MotoGP getting ready to go into the last year of the 800-era, the rules changes planned for 2012 and beyond is somewhere close to 'WTF?' in trying to understand just what shape the series is taking for the future. Not that any step might not be the correct one with the processional races that have seemed to develop due to current electronic aides at hand with the multi-million dollar bikes.

David does a great job of shining light on the subject and exactly how the new rules break down in one of his latest pieces, and although I'm not ready to go out and try to help develop a new up and coming MotoGP entry, I at least have a better understanding of what Dorna and MotoGP have in mind to help build (and fill the grids) for the future of world championship racing.

You can check out his great column on the upcoming changes (and maybe you won't have to scratch your head so much after doing so, either) right here: