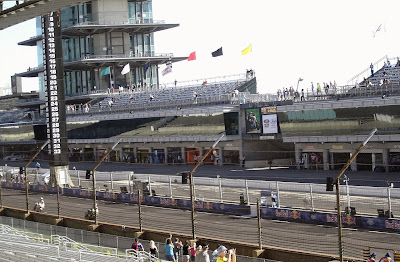 The Indianapolis Motor Speedway announced today that tickets will go on sale starting tomorrow for the 4th Annual Red Bull Indianapolis MotoGP round at IMS for the weekend of August 26-28, 2011. Special ticket pricing remains in effect for the 2011 event, similar to the special pricing that was introduced for the 2010 event at the World Capital of Racing. As was the case this year, three Americans will represent the United States for the MotoGP elite series again in the 2011 season.

Nicky Hayden returns to the Marlboro Ducati team in hopes of getting the team and the '06 MotoGP World Champion closer to the top of the box again. Hayden's best finish with the team came at Indy in his first year on the Italian squad in August of 2009 when he finished third behind winner Jorge Lorenzo and runner-up Alex DeAngelis. He finished his first year on the big-bang Ducati in 13th in the World Championship, and with one round remaining for the 2010 season at Valencia this weekend, he is currently tied for 7th in the championship, with fellow American Ben Spies holding the tie breaker via his podium finishes this year.

2010 MotoGP Rookie of the Year Ben Spies will be moving up to the factory Fiat Yamaha team alongside new 2010 MotoGP World Champion Jorge Lorenzo. Whether Fiat returns to the team is yet to be determined for the 2011 season, as talk has been heard for months that with 7-Time MotoGP World Champion Valentino Rossi moving to the Ducati team, that the Italian Fiat brand may just move along with him, making for a 3-tiered Italian strike on the MotoGP World Championship for the 2011-2012 seasons. This could make for an interesting trifecta for all fans of racing, let alone the extremely passionate fans in Italy, and may be the most interesting off-season story concerning sponsors in the elite championship should it come to fruition.

Colin Edwards, the former 2-Time World Superbike Champion, will also be on the grid for the 2011 season, again astride the Tech 3 Monster Energy Yamaha YZR-M1. It was suspected several weeks before the Indy round in 2010 that Edwards may have been moving back to World Superbike, but with Ducati pulling out of the premier production series to concentrate their efforts in the MotoGP series, those plans pretty much went up in smoke for the Texas Tornado. That left Edwards and Tech 3, without any other viable options for the 2011 season, and the France-based satellite team re-signed him for another year to team alongside new-signee and '09 World Supersport Champion, Cal Crutchlow.

You can read the official press release here from the offices of IMS: