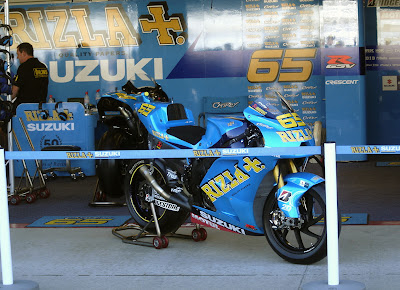 Loris Capirossi's last ride with the long-suffering and under achieving Rizla Suzuki MotoGP team came to a close with nary a whisper, as he finished out of the overall classification some 17 laps arrears at the season-ender in Valencia. The 3-Time World Champion (125CC World Champion '90-'91, 250CC World Champion '98) ended up finishing in the 16th spot in the 2010 MotoGP World Championship standings, and will be moving to the Pramac Ducati team, hopefully with much better results down the road. Before this year, and since he had joined the premier class in 2000, 'Capirex' had never finished outside the top 10 in the overall point standings. He finished the '08 season in 10th and last year in 9th while riding for the rolling papers team. Capirossi started the year at Qatar with his 300th appearance on the premier class grid.

Rizla Suzuki has struggled mightily in the premier road racing class in the world, and for the most part haven't been but a blip on the radar since Kenny Roberts, Jr. won the 2000 500CC World Championship. The England-based team will trim down to one bike/one rider for the 2011 season after it was initially thought they would be leaving the series completely earlier in the year. Dorna, the governing body for the MotoGP/Moto2/125CC World Championship Series, will be helping out to kick in some needed support in hopes of plugging the dike of leaking/thinning grids in the high-dollar MotoGP series to keep Suzuki from leaving the sport altogether. And in support of the team from this fan's standpoint, they HAVE at least stuck around all these years in terms of bikes on the grid. Their results have been far less than stellar, but they have filled a major need in what has been a big drop off in teams competing in the series the last few years. And with 16-17 bike grids, that's saying a bunch right now.

Tomorrow kicks off post-season testing in Valencia with all the major movers getting acquainted with their new surroundings. Moto2 teams hit the track on Monday, with Colin Edwards reported to be testing the Tech 3 team's entry to further help develop that machine after the intitial season for the first-year class. Kenny Noyes' Jack and Jones Antonio Banderas' owned team will be leaving the Promoharris chassis in the garage and moving to a Suter chassis for the 2011 season, which should better align him and the team with the more popular chassis option after the first year of the series.

Tuesday morning will see the changes everyone has been hearing about, speculating about and known about almost the entire 18 race season in the premier MotoGP class. '07 MotoGP World Champion Casey Stoner will be aboard a Repsol Honda after his four year stint with the Marlboro Ducati team, 2010 MotoGP Rookie of the Year Ben Spies will be straddling the Factory Fiat Yamaha, and Capirossi and DePuniet will be on board with the Pramac Ducati team.
Oh yes, some guy by the name of Valentino Rossi will be riding for some team out of Italy on a big red Ducati.