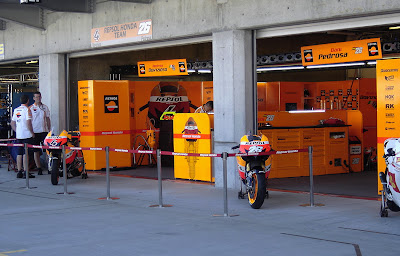 Ben Spies, who clinched the 2010 MotoGP Rookie of the Year Award two races ago, suffered what has been 'termed' a severe sprain during the warm-up for the final event in Portugal last Sunday. The Tech 3 Monster Energy Yamaha pilot's availability was in question for the season-ender as to how severe this sprain was. However, after talking to SuperBikePlanet.com's own Dean Adams the first of the week, he was assured that he would be riding this weekend. Elbowz was 9th in free practice 1 this morning just over a second back from Stoner, and in free practice 2 had moved up to 6th just .838 seconds in arrears of fast-man Lorenzo. '06 MotoGP World Champion Nicky Hayden, who sits in the 7th spot in the championship standings on the Marlboro Ducati, was 6th and 10th in the two sessions today and hovering just under a second behind the front.

You can follow the season-ending round at Valencia here thanks to the Repsol Honda official site: