Jason Pridmore Catches Up With RRX 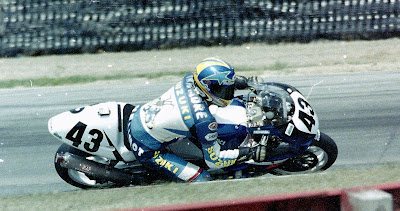 Anyone that has followed AMA Road Racing for any length of time will recognize the name Jason Pridmore from the many years he graced the sport with his riding prowess. The son of the very first 3-Time AMA Superbike Champion Reg Pridmore, Jason went about setting a legacy of his own throughout the various AMA Road Racing classes for better than a decade and a half, as well as competing in Europe in the FIM World Endurance Championship for the last several years.

One of the first times I really noticed Jason was at Road America in the summer of '92 when he actually beat Scott 'The Screaming Chief' Russell in the AMA 750 Supersport event, when Russell was on a major tear in that class. The previous year Russell had gone undefeated in the old 750SS class, and was near that again in '92, when Pridmore managed to put a small, but noticeable dent in his streak at the sprawling four mile course in Elkart Lake, WI. He was riding a Suzuki at the time that was sponsored by his and his father's Star Schools that year.

Jeff Feathers over at RoadRacerX.com caught up with Jason about what he has been doing as of late and what his plans are for the 2011 season and beyond. Thanks to Jeff and RRX and you can read up on Jason here: