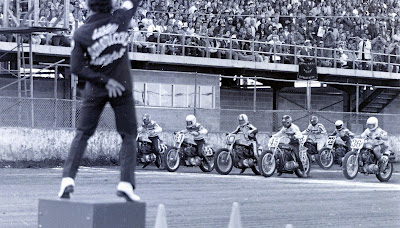 Heat race action kicks off at the Syracuse Mile on the New York State Fairgrounds mile oval as the official AMA starter drops the flag and AMA Flat Track Grand National Championship Racing gets ready to thrill the thousands of fans who have packed into the grandstands to see the best of the best in flat track racing take it to the limit at 100 MPH speeds. Back in those days, people crowded and jammed into the stands to witness the high-speed art of AMA Flat Track Racing, and in many cases it was standing room only to get a seat to the great Rolling Thunder Show, the best show in racing in the world.

L-R: On the front row dropping the hammer are Rex Beauchamp #31 and Gary Scott #64 ('75 AMA Grand National Champion) on the Harley-Davidson Factory XR's, Dave 'Bones' Aldana #10 on a self-sponsored XR, multi-time Canadian flat track champion Doug Sehl on the #45 XR (I believe Sehl was sponsored by Poole's, one of his long-time Canadian sponsors), #36F Jim (?). On the back row you have Keith Ulicki on the #8K XR, and current AMA Flat Track Manager & '81 AMA Grand National Champion Mike Kidd on his Kruger Racing-sponsored XR750. Jim on the #36F and Mike Kidd on the #72 get some serious air as they rocket off their respective lines.

Today's program has evolved somewhat in comparison to 35 years ago. Even a few years ago, for that matter. The Expert Twins class now typically runs three 8 lap heats and two 8 lap semis, with spots 1-4 in the heats qualifying for the main, and spots 1-3 in the semis putting it into the show. In the old days, it was four heats, a couple of semi-races (all 10 lappers) and a LCQ (last chance qualifier) that gave the winner-only a spot in the show. (Remember Kenny Roberts' August '75 Indy Mile win on the TZ? He made it in the show by winning the LCQ, racing more laps that night then any other competitor, and then winning it by inches after 25 laps.) Main events still are comprised of 18 or 19 starters (today the rider's can use a 'provisional' to get into a race if necessary) as they were in the old days.

Track grooming would last for what at times seemed like days, and would be a constant in the delays in the show. Today, that is almost non-existent in the quick show that the new AMA Flat Track runs. Practice and qualifying took up a large part of the program in the old days-which was great for the competitors (in the seat time earned for an event trying to get the right set-up) but was a long, drawn out affair that now is whittled down to four 4-laps sessions that make the rider work for his place in the starting field, but much more timely in terms of the length of the day.

You can see the amount of fans on-hand for this classic event. Similar in numbers attendance-wise at what you see at the Springfield Mile and Lima Half-Mile today, typical and long-standing events in the series that have held and kept high attendance numbers. And in terms of today, new events held in Prescott Valley drew 'sold-out' numbers. Many other events held recently are also starting to show signs of good-to-great attendance levels, which is good for you, me AND the people that put on the show. Without, you don't have a show. And trying to keep those new AND old fans coming back is tantamount to growth, obviously, in the sport, but as well as getting the promoters of those events to not only re-up, but possibly sign-on to help promote OTHER possible events to add to the calendar.

Competition from different manufacturers was pretty constant in those days as well. Yes, Triumph was slowly going away, but still won a number of events on the TT courses up until the early-mid '80s even. Yes, the Yamaha parallel twin was on losing ground to the ever-conquering XR, but Yamaha shortly thereafter set it's precedent in the sport with it's release of the 500TT single-cylinder model, which went on to win numerous races in the series. Kawasaki at least had a presence until the end of the '75 season with Erv Kanemoto's H2-based triple two-strokes. No, they never won an AMA Grand National, but you always knew there was THAT chance whenever they showed up, especially at a mile event. Norton had all but gone away, too, but a man by the name of Ron Wood and a terrific rider by the name of Alex Jorgenson campaigned one into the early '80s, and regularly made races, and even won one or two along the journey.

Today's competition amongst manufacturers is probably better then it's ever been in the series, whether in the Twins or the Singles class. There are eight manufacturers that are represented by twelve models that are homologated to run the Twins class, and something like fourty-some models from numerous manufacturers homologated to run the Singles class. Sponsorship and television are the other areas that also seem to be helping to shine some light back on AMA Flat Track, and looking to improve in the year, or years to come.

There is still more work to do, but in terms of the sport overall, AMA Pro Flat Track Grand National Championship Series Racing is definitely on the upswing. And we can thank the vision of AMA Flat Track Manager Mike Kidd and Team AMA Flat Track for helping to turn it around, and putting on a great show for the fans, let alone the competitors. After having gone to these things for 37 years now, I can firmly say this isn't your father's AMA Flat Track, and that is a very good thing.

Mark did a great job of talking with MK about what is (and hopefully what will be) happening in the great sport of AMA Flat Track. This is a very good read, even for casual fans, and if you are of the hard-core variety such as myself, it's a MUST READ!

Check it out, and thanks to Mark Gardiner and Mike Kidd for this insightful look at the best show on wheels in racing: