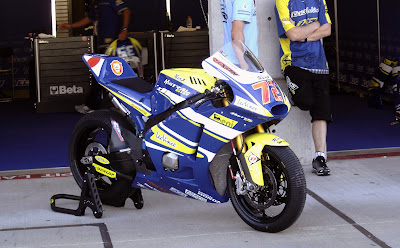 -------------------------------------------------------------------------------------------------
Tech 3 Racing's Moto2 entry of Yuki Takahashi sits outside the team's garages during the Red Bull Indianapolis MotoGP round in August a little over two months ago. Takahashi finished the season ranked in the 12th position in the inaugural year of the Moto2 class on the #72 Tech 3/Packard Bell/Leo Vince sponsored machine, while team mate Raffaele de Rosa on the team's #35 like-sponsored entry finished in 27th place in the season ending standings. Takahashi will be racing for the 2010 Moto2 World Championship-winning team of Gresini Racing in the 2011 season, and de Rosa's whereabouts for the upcoming season had not been officially announced as of this writing for the upcoming season. He was, however one of 31 riders to test today in the Moto2 class in Spain. Takahashi did win the Barcelona round on the team's bike back in July and was runner-up in Brno in August for his best results of the year.
Colin Edwards, who is well known to U.S. fans, as well as his great following of fans across the pond, tested the team's entry today at the Valencia circuit, putting in 54 laps on the day. The Texas Tornado, who recently re-signed with Tech 3 to ride the Monster Energy YZF-M1 again in the MotoGP World Championship in 2011, is widely known as one of the better motorcycle racing test and set-up gurus around the paddock. He ended up 20th out of the 31 riders to take to the track while helping the team to test suspension settings to try and help improve on their somewhat dismal results for the team this year. Edwards will be on-board the #5 Monster Energy M1 tomorrow in Valencia as the two-day MotoGP tests kick off before the long season-ending break.
-------------------------------------------------------------------------------------------------
Moto2 testing today in Valencia saw Colin Edwards aboard a 600-based machine for the first time since Daytona of 1994. Edwards, the '00 and '02 World Superbike Champion, offered to help Tech 3 Racing out with their Moto2 efforts in today's test session in order to help them gain a perspective on their dismal results for the inaugural Moto2 season. Turning 54 laps on the day, The Texas Tornado tried to help the team concentrate on suspension settings in order to turn the handling around on the team's entries in the class, which builds it's own chassis for the new class. Edwards told Cycle News.com's Henny Ray Abrams that the last time he was on a 600-based race bike was at Daytona in '94, when he was contesting the AMA Superbike Series as well as the Daytona round of the AMA 600 Supersport Series for the Vance and Hines Yamaha team.
Moriwaki, Suter and FTR seemed to be the more dominate chassis this year that were used in the all-Honda powered class, and the class also runs on spec Dunlop tires. One of Edwards complaints seemed to derive from the 'lack of power' in the machines, compared to a modern Superbike or especially a MotoGP bike (not that that is a big suprise!) The new class, that took over for the old 250CC World Championship for this year, made for some very close and exciting racing this year, with as many as 42 riders on the grid at each of the 17 rounds. Toni Elias won the inaugural championship while running for Team Gresini and had clinched the championship
in Malaysia back in October. Yesterday's season-ender at Valencia was won by Karel Abraham, the ninth different winner on the year. Elias will be moving back to the MotoGP class for 2011 with rhe LCR Honda team, replacing departing Randy de Puniet. Abraham will be moving along with his Cardion AB team to the MotoGP class for 2011 as a satellite entry for Ducati.

Here are the overall times in today's Valencia Moto2 tests thanks to the folks at RoadRacingWorld.com. Edwards and Tech 3's new Moto2 team mates talked about today's efforts:

Thanks to Ultimate Motorcycling.com for this link to the press release from Tech 3 announcing the new team mates on November 2, Bradley Smith and Mike di Meglio for the 2011 season in the Moto2 class: