AMA Flat Track: Mike Kidd Talks About Turning it Around in the 2010 Season 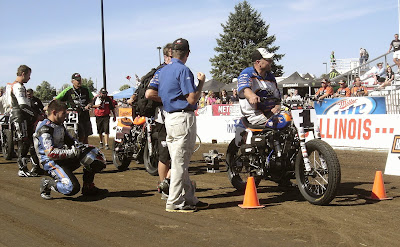 -------------------------------------------------------------------------------------------------
AMA Flat Track Manager Mike Kidd, the '81 AMA Flat Track Grand National Champion, can be seen talking with members of Jared Mees' Rogers Lake/Blue Springs H-D team just prior to rider intros for the Springfield Mile Grand National on September 5. Mees can be seen kneeling alongside and behind his bike and crew. Behind him standing to the side is Willie McCoy, rider of the #59 H-D of Wausau/Independence H-D XR.
Further back, Tuner to the Stars Bill Werner holds Bryan Smith's #42 Werner Springsteen Monster Energy Kawasaki (the eventual winner of this event), and then (partially hidden) Kenny Tolbert holds Chris Carr's #4 Lancaster H-D/DFW Honda-sponsored XR.
With what he calls his '5-Year plan' to resurrect AMA Flat Track, Kidd and Company (including AMA Flat Track Operations Manager and former National #42 Steve Morehead) are ahead of the game plan in terms of turning the sport around. With new venues on board that also have promoters that have been capable of selling the show and putting paying butts in the seats, and with several long-time returning venues that have been capable of promoting AMA Flat Track Grand National Championship competition, the series is well on it's way to breathing new life into not only the sport, but the motorcycle industry as well.
Kidd made his mark on the series originally back in the early-mid '70s, riding for several factory efforts including Triumph and Harley-Davidson, among others. After finally grabbing hold of the coveted AMA Flat Track Grand National Championship #1 plate in the '81 season, Kidd signed on with Team Honda to help further develop what would end up being a very lethal RS750 that all but re-wrote the record books in AMA GNC competition, until they pulled their factory representation out of the sport in the late '80s. The Honda RS750 went on to live strong and stay at the top for several years, including Ricky Graham's miracle season in winning it all in '93. The RS750 won it's last AMA National event at Joliet in August of 1998 at the hands of former National #80 Rich King, but forever lives on in many (and this!) fans eyes and memories as a result of efforts put forth in the early development years by one of the flat track masters of all time, Mike Kidd, who retired from active competition at the end of the '83 season.
Taking the time to speak with me briefly at Springfield over the Labor Day Weekend, one of the main things he mentioned about the 'old' AMA was that they 'didn't understand the entertainment value' of the sport, thusly the programs would drag along and sometimes take hours to run due to the disorganization. And if there is one thing (among MANY others when it comes to racing!) that MK knows is entertainment, as his record and prowess of running the Arenacross Series is for one a showcase of HOW to promote a sport and it's many venues. Mike's brother Gary has also worked with him over the years, and currently takes care of all credentials (among other duties) at all AMA Flat Track events.
The two of them, along with the VERY long list of people (besides Morehead) who they have surrounded themselves with to run the show, have done a VERY remarkable job of turning it around. And I am saying that having followed this sport for over three-and-a-half decades. Never has the program been tighter, well choreographed and safety-minded since Team Kidd and Company started
to oversee The Rolling Thunder Show in the 2009 season. And in terms of the '5-Year plan,' they still have three years to hone the program to what is already looking like a VERY finely-tuned machine to a series that was struggling, except for a few long-time venues (anything run by the IMDA would fit here.)
With new tracks and a new rules package introduced to open up the level of competition against the series-standard H-D XR750, this year saw some of the best and most exciting racing in some time. I've been saying almost all year now, that if you haven't been to an AMA Flat Track event in some time, 2011 would be the time to do so again. This isn't your father's AMA Flat Track anymore, and the future could never look better for the best and most exciting form of racing in the world.
Make your plans now, because 2011 should be EVEN BETTER then what we have seen this year!
-------------------------------------------------------------------------------------------------
Road Racer X's own Backmarker himself, Mark Gardiner, was on-hand at the season-ending AMA Pro Flat Track K&N Filters presented by Motorcycle Superstore.com Grand National Championship round in Prescott Valley, AZ., to take in all of the action at the Budweiser Racing Arizona Mile on the Yavapai Downs mile oval. Mark is one of the good guys in the business, and does a super job of helping to cover AMA Flat Track Series racing, especially considering he writes for a road racing magazine.

While on-hand to check out all the great action at round 16 of the series, he also got a chance to talk with former '81 AMA Flat Track Grand National Champion Mike Kidd, who has overseen the series since coming on board for the 2009 season. Kidd, his brother Gary, former National #42 Steve Morehead and a VERY long list of fine and hard working people have been running the new show since the beginning of the '09 season, and are responsible for turning around a series that was in desperate need of help. Since that time, with new venues, new rules and new blood being introduced to The Rolling Thunder Show, the series is breathing on it's own and starting to look better then it has in decades. And the competition level has stepped up a notch to add to what has always been the most exciting form of racing in the world.

You can check out Mark's great interview with one of the long-time stars of the sport, and also one of the saviours of AMA Flat Track, right here. Part one is this week, and we will add part two next week when Mark files his follow-up interview and review.

Great job Mark! And Mike Kidd and Company, we bow to you for saving the best sport on wheels and breathing life into the great sport of AMA Flat Track Grand National Championship Racing!