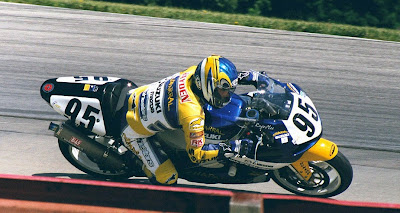 Now, with that being said, in the original press release as shown below and on several sites yesterday, no where was it mentioned that the team would be campaigning Suzukis again for the 2011 season. The Jordan team has campaigned the Suzuki marque exclusively since their second year of competition in 2005 in the AMA Road Racing Series, winning an AMA Superstock Championship along the way, as well as finally getting their long-overdue premier class win at Daytona back in March with Jake Zemke. Even going to the team's official site (23race.com) there is no mention either way of a move from Suzuki.

As pointed out in the press release from Dean Adams' SuperBikePlanet.com below, no where is Suzuki mentioned. When it was announced that Bostrom was joining the team back at the first of the month, the only place 'Suzuki' was mentioned was in the sponsor list at the bottom of the release. Henny Ray Abrams at Cycle News.com had a story yesterday as well, and mentions Suzuki throughout, so this may just be an oversight--on either end. With the recent release of the new-and-improved 2011 Kawasaki ZX-10R, there is a boat load of speculation that several teams could be 'going green' for the 2011 season, including the Attack Performance and Pat Clark teams. Again, this may just be speculation, but, that's why they call it silly season!

The great news, though, is that Roger Lee is coming back to the States to compete in the premier road racing class and series against his older brother Tommy. After the year that RLH had in WSBK, and his one-off rides at Laguna and Indy, I'm sure he's ready to get back aboard a competitive ride. And no matter which way Michael Jordan Motorsports goes, you know they are going to pump out some race-ready and competitive machinery.