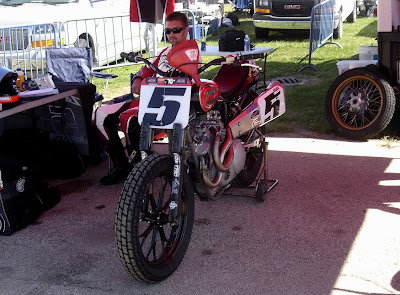 This was the first year since the end of the 2005 season that AMA Flat Track had combined the overall championship, and Johnson and the Zanotti Racing team had what it took to add to their long lists of accomplishments throughout the years in the series. Johnson adds the overall and Twins Championships to his '06 and '08 Singles Class Championships, and Zanotti Racing adds to it's legacy and winning ways in AMA Flat Track to be the only father and son-run team to win the coveted #1 plate in the top form of American flat track racing. Dave's father, Mario, teamed with '76 Rookie of the Year Steve Eklund to win the 1979 AMA Flat Track Grand National Championship.

Jake got a chance to talk with the great folks over at RoadRacerX.com at the end of the season, and you can check out the chat with him below as he talks about hooking up on the track and the difference between the cushion and the groove, among other things.

Congrats again go out to Jake and the Zanotti team for a stellar year!

Thanks to the great crew at Road Racer X.com for putting this chat together with Jake Johnson, the 2010 Champ!