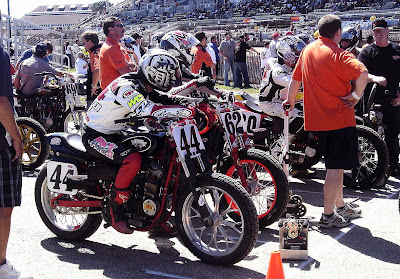 Brandon Robinson sits on his #44 Lancaster H-D/Action Motorsports/Ruckus 44/Moose Racing-sponsored XR750 prior to one of the qualifying sessions at the Springfield Mile on September 5. Round 14 of the AMA Pro Flat Track K&N Filters presented by Motorcycle Superstore.com Grand National Championship Series was one of the five Twins Series events that Brandon was able to make the final in this year after his devasting 'flying out of the park' crash at the Lucas Oil Indy Mile in August of 2009.
After winning the '08 AMA Pro Flat Track Pro Expert Twins Championship (the ladder-series that was replaced in '09 with the Pro Singles Championship), Brandon suffered what would be considered 'career-ending' injuries as a result of his Indy crash, but came back with the fire in his eyes ready for the 2010 season, and was one of three riders to help test the new Daytona short track in January 2010 in preperation for the opening rounds in March. It took several surgeries to get him pieced back together, and the young man from Oxford, PA. more then showed he was ready to return to competition for the 2010 season, albeit with a slimmed-down schedule for the year to better aide him in his complete recovery.
It was a rough ending for what started as a fairly good day, as he set 15th fastest time in combined practice (out of 52 riders that timed-in for the event), and then setting 24th fastest time in qualifying (out of 54 riders that timed in to the 48 qualifying spots for the heat race line-ups.) Eventually finishing second to semi one winner Shaun Russell to get his card for the National main event, his day ended prematurely and he was credited with 18th in the 18-man final. He also garnered an 11th place finish at Lake Odessa, a 10th place finish at Hagerstown to go along with his 13th and 16th place finishes in the Yavapai Downs events.
Other riders in this shot are Luke Gough on the #62 Dick Ford/KK Cycle/American H-D/Eaken Racing-sponsored XR, and Steve Bonsey, the first-time winner from the summer stop at the Calistoga Half Mile, on his #80 Johnny Goad/Alpinestars/Dodge Bros/Happy Trails-sponsored XR. Jethro Halbert's #69 Kings Kustoms/Nelson Racing/KK MC Supply/Fluid Suspension-sponsored team can be seen in the back corner of the shot with Jethro's XR at the ready for the session.
------------------------------------------------------------------------------------------------- 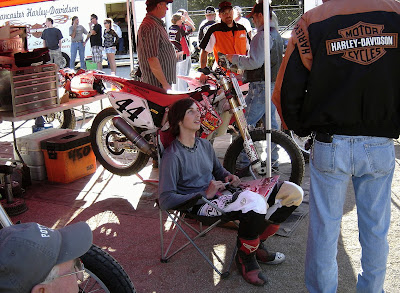 Brandon Robinson talks with the fans during round 13 at the Springfield Short Track Rodeo Arena during the weekend's events for the annual stop on the AMA Pro Flat Track K&N Filters presented by Motorcycle Superstore.com Grand National Championship Series. Brandon's #44 Action Motorsports/Lancaster H-D/Ruckus 44/Motion Pro-backed Honda CRF450F sits in his pit stall behind him.
After running 18th in the combined practices for this event (out of 72 riders!), Brandon qualified in the 22nd spot to earn his spot amongst the 48 riders that would make the heat race cut for the evening. Finishing in the 2nd spot in the first semi behind #11W Scott Baker to gain his spot in the National, Brandon brought it home in the 13th spot out of the 19 rider final. He also added a very impressive 7th place finish at the Gas City Short Track round back in June for the two Singles Class main events he made for the year.
Making his finish at the Gas City round even more impressive to this writer was hearing him talk with The Rider Files.com's Larry Lawrence during a break in the action that afternoon about the multiple surgeries he had gone through after his Indy crash, and talking about his will to get back to racing full-time again, not to mention full-strength. He is definitely determined, and has shown that he has what it takes to run in the bigs again.
This has been a great comeback for a personable young man, who looks to return for more in 2011. Great job Brandon, we can't wait to see you again in the upcoming season and we were very excited to see you back this year after seeing first-hand the tumble you took out of the park here in Indy at the '09 event. Keep that chin up and keep on keepin' on man, you've got a great attitude and definitely have what it takes on the track to mix it up with the boys in the bigs. 2011 should be even better for you AND your fans!
-------------------------------------------------------------------------------------------------

One of the best 'feel-good' stories of the year in AMA Pro Flat Track K&N Filters sponsored by Motorcycle Superstore.com Grand National Championship Series Racing was the return of National #44, Brandon Robinson to the series' tour for the 2010 season. For those of you not familiar with this personable young man, Brandon was the rider that suffered serious injuries during the National main event at the Lucas Oil Indy Mile in August of 2009.
During the start of that race (for those of you still going 'Brandon Who?') there was a crash at the start of the Grand National main that night that involved a rider who ended up flying over the fence-along with his bike-right before the riders were coming into-and-out of turn one. (Although there are a few amateur videos out of this devasting accident, I chose NOT to post it here for this story. If you need to see it, you can find one on YouTube.)
Brandon Robinson sailed out of the park that night and sailed into AMA Flat Track Series racing history for suffering what well could have been career-ending injuries, only to return to the series to run a limited schedule for the 2010 series, making seven National main events along the way and an 18th place finish in the final year-end standings. A very impressive accomplishment for this young man, who as of this summer had gone through seven surgeries to repair/piece together his shattered pelvis.
Getting a chance to meet him and see him compete at Gas City back in June, I was equally impressed with his general attitude, his will to return, and his recovery from his injuries that he suffered. Listening to him speak with The Rider Files.com's Larry Lawrence at that event made me an instant fan, besides the fact that I knew enough about his background before the incident to know he was one of the series' best and top up-and-comers.
After winning the 2008 AMA Pro Flat Track Grand National Pro Expert Twins Championship (the feeder/ladder series that was replaced with the Pro Singles Class for the 2009 season), this young man was expected to be one of the hot young new rookies in the top-level AMA Pro Flat Track Grand National Championship Series competition in the coming years. Getting to hear him talk about what he had gone through was in itself enough to open even a casual fan's eyes, let alone mine after having followed this great series for over three and a half decades. Needless to say, many riders would have retired, or had to have retired, after such an incredible series of events. Not Brandon! He is a true racer and couldn't wait to get back, as racing runs in his blood.
Admittedly, #44 took the 'ease it back in' route for the 2010 season, purposely skipping events like the Springfield and Peoria TTs, so as not to jolt his still-healing injuries in any event that could or would further prolong his healing period. Along the way, while making those seven events for the year, he was also working on his confidence as well as re-learning to battle 17 or 18 other men on a half mile or mile track, to be assured himself he was up to mixing it up again from a psychological standpoint at the level it takes to compete on the Grand National Championship schedule.
This writer can assure you after seeing Brandon back in action for the 2010 season that he can, and we also look for him to step it up for the 2011 season, as he works himself back to the level he was at before his accident. And we glad to see him back in '10 and are excited about seeing Brandon back on the track again for the upcoming season.
Congrats on a great comeback Brandon, and we're looking forward to seeing you again next year!
-------------------------------------------------------------------------------------------------

Wayne Hosaka's Flat Track.com has this press release from BRob44 talking about the end of the season and looking forward to 2011:

The great guys at SideBurn Magazine posted a shot of one of Brandon's x-rays from his recovery and you can take a look here at what kind of metal AND mettle this fine young man has in him: