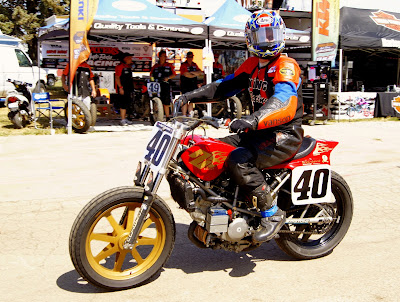 Aaron King rolls out of the staging area for a qualifying session on the #40 Weirbach Racing/Toads Racing/General Engineering/Moose Racing-sponsored Suzuki SV650-based mount at round 16 of the 2011 AMA Pro Flat Track Harley-Davidson Insurance Grand National Championship Series at the Springfield Mile II on September 4.  King was able to qualify in the 30th spot (out of the 48 riders that made the cut) on the Weirbach Racing machine, but finishes of 11th in his heat and 8th in his semi kept him out of the National main event at the Illinois State Fairgrounds.  But the Iowa team wasn't ready to let it go at that for their Iowa rider, thankfully.

The son of former AMA Grand National Championship competitor and former National #80 Rich King, Aaron was able to turn it around the next weekend at the Knoxville Half-Mile.  King qualified in the 23rd spot and then fought his way out of his semi with a 3rd place finish to put him in the show, where he rode the Weirbach Suzuki to a solid 10th place finish in his first main event in the Expert Twins Series class for the 2011 season, besting his previous best finish in a National Expert Twins Series event (12th place-Arizona Mile I in the 2010 season.)  King also made the main in three Singles Series events throughout the 2011 season, for an eventual 26th place ranking in the season-ending standings. 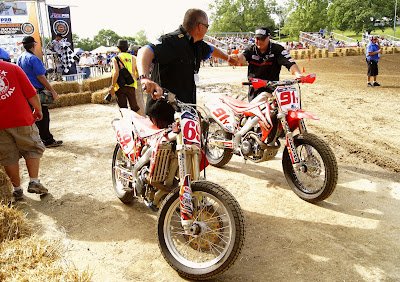 As the podium ceremonies come to a close after the AMA Pro Motorcycle-Superstore.com Pro Singles Championship Series round at the Springfield TT on May 30, 2011, two of the podium finisher's teams congratulate one another after the 16-lap event.  3rd-place finisher Hayden Gillim's #69C Thirty Four Racing/Bell Helmets/Teknic/Fly Racing/Alpinestars-sponsored Honda CRF450R and 2nd-place finisher Mikey Martin's #91Y Weirbach Racing/General Engineering/Barnett Clutches/Spectro-sponsored Honda are attended to by their respective team members as winner Mikey Avila can be seen departing the podium ceremonies in the background.

Mikey Martin went on to win the 2011 AMA Pro Motorcycle-Superstore.com Pro Singles Championship at the end of the season while riding for the Iowa-based Weirbach Racing team.  Team owner and head wrench, Dick Weirbach (pictured above with Martin's machine) has been around flat track racing for decades, and between him and his son, Ted, have put together some solid equipment and results with a strong resume of riders over the years, including Martin, Mikey Labelle, Jesse Janisch, Henry Wiles and Sammy Halbert, to name just a few.

For the 2012 season, Weirbach Racing will be sponsoring riders Aaron King National #40 and up-and-coming former amateur racer, Ryan Wells.  After suffering through a transport fire just hours before the start of the Springfield Mile I on May 29, the team came back with a big bang and won the 2011 Pro Singles Championship, and still made time for riders Janisch and King to get some quality track time on the still-young Suzuki SV program.

November 28, 2011, Ottumwa, Iowa–
Weirbach Racing announces the sponsorship/support of two young racers, 16 year old Ryan Wells from Albion, New York who will compete for the AMA Pro Singles Championship in 2012. In 2011 Ryan was one of the top amateurs in the country. New to the team this year is national number 40 Aaron King from Waterloo, Iowa.
Aaron will compete in the Expert Grand National Series riding our Suzuki SV-750, which he rode for the first time to a season best 10th place finish at the Knoxville 1/2 mile National.  We will have a third rider from time to time on one of our Hondas and our new XR 750.
Dick Weirbach, a 40 year veteran of the flat track racing scene said:
"I am pleased to have these two fine young men to add to the list of names that have been part of Weirbach Racing. I know they have the talent to carry on the winning traditions of past riders, and conduct themselves in a way our sponsors will be proud to be associated with them on and off the race track.  Our goal for 2012 is to win the Pro Singles title and keep developing the SV into a strong competitive machine on the miles and half miles.”

Ted added -
“We are looking forward to another great year. Expectations are high coming off Mikey Martin’s championship run in Pro Singles Series and this year we are going to build off that momentum and raise the ante for 2012. Ryan Wells and Aaron King are both great representatives on and off the track. Be on the look out for information on the launch of our XR750 program as well. More to come on that topic as we get closer to the 2012 season.”

Ryan Wells made the following statement -
“ I would really like to thank Dick and Ted Weirbach and the teams sponsors for giving me the honor to ride for them in the 2012 AMA Pro Singles series. I am very confident joining this team, especially due to the fact of how many great and talented riders have shined before me.

Aaron King stated
“I'm very excited to be joining Weirbach Racing for the 2012 season. The SV has made big strides thoughout the end of the year and I'm looking forward to the challenge of making more main events. I need to thank Dick, Ted and all the teams sponsors for giving me this great opportunity.”
The team is preparing motorcycles for the season over the winter months, focusing on a successful 2012 season. They are always interested in new sponsors to be part of this growing team.

About Weirbach Racing
Weirbach Racing is run and owned by Dick and Ted Weirbach. Dick himself raced as a novice in the late 60’s and even owned a Bultaco motorcycle shop for eight years. He is currently retired and started sponsoring riders under his own program in 2000. In 2009, the inaugural year of the AMA Pro Singles Championship Weirbach's Racing James "the Rocket" Rispoli took second place overall setting a high water-mark. Then in 2011 Mikey Martin won the Pro Singles Title. The names of riders that have had the pleasure to work with Dick & Ted are notables such as Henry Wiles, Robbie Pearson, Sammy Halbert, Davey Durelle and more. Check their web site for more information at:
www.weirbachracing.com