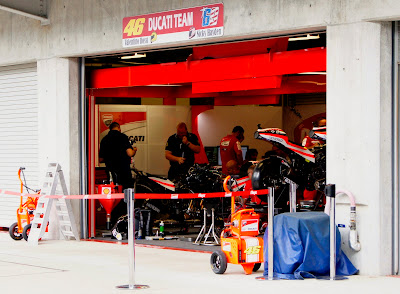 The Ducati garage is abuzz with the team's technicians working to get the GP11s of 7-Time MotoGP World Champion Valentino Rossi and '06 MotoGP Champion Nicky Hayden ready for the 4th Annual RedBull Indianapolis MotoGP round in August 2011.  Having suffered from a rough weekend (and year) while developing the Italian team's present machine and it's 2012 1000cc-version, the GP12, Hayden had managed to qualify 8th, with 2008 Indy MotoGP winner Rossi back in the 14th spot after crashing out earlier in the weekend's events.  Rossi would go on to soldier home to a 10th place finish in the world championship round on Sunday, with Hayden experiencing severe tire overheating problems, relegating him to a 14th place finish after being forced to pit for a new tires.

With the MotoGP/Dorna testing restrictions in place the last few years, it has somewhat-helped the MotoGP teams in terms of extreme dollars being spent in excess testing sessions, but has hindered development and some forward movement to Ducati, especially in terms of Rossi being able to become comfortable on the team's machines after having been on the dominant Yamaha M-1 for so long.  In his first season on the Italian machines, Rossi ended the season ranked in the 7th spot, with Hayden 8th in the final 2011 MotoGP World Championship standings, and only one podium each throughout the course of the 17 event schedule.

With less restrictions on test dates now being put in place for the 2012 season, and a set maximum number of Bridgestone tires being alloted to use put in place instead, the buzz seems mixed overall as to what the 2012 season holds for how much testing is too much, at least from some of the riders's standpoints.  However, Ducati looks at this as a great opportunity to be able to utilize known test-master Rossi to further and more quickly develop the team's machines, instead of having a set 'test rider-only' try to develop the machines going into the new 1000cc era.  Which makes the development curve less steep for the smaller team.

With an overall test ban in place until after the first of the year, the 2012 MotoGP World Championship season is still months off.  The first round at Qatar is scheduled for April 15, 2012, but will surely be preceded by many days and many miles of testing for all teams.  But this can't not help Ducati going forward, especially coupled with the team's move to an aluminum chassis after developing the carbon fiber chassis for the last five seasons, which seemed to be an enigma to all riders, except for recently departed Casey Stoner, who won over 30 events throughout his four years with the team.  To anyone else, except for Hayden who has at least improved somewhat on the stiff machines, it has seemed to all but have been a career-killer.  Former rider Marco Melandri being the almost-lone exception in re-starting his career in World Superbike this year with the Yamaha WSBK team.

Thanks to Motorcycle News.com's Matthew Birt on this article about Ducati's outlook on the testing restrictions being lifted for the 2012 MotoGP World Championship Series season and being able to close the gap to the front of the MotoGP grid again: