AMA Flat Track: Looking Back at the '11 GNC Season with The Fast and Dirty Video Highlights 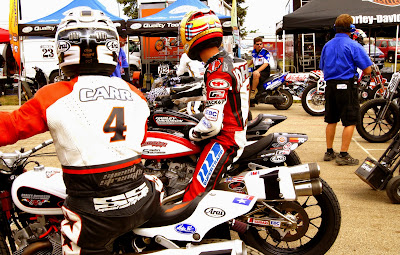 With the 2011 version of the AMA Pro Flat Track Harley-Davidson Insurance Grand National Championship Series rolling into the Illinois State Fairgrounds mile oval over the Labor Day weekend, the riders and teams were ready to get on the track for the first practice session in the series' third (and final) mile event of the year.  Under warm and windy conditions, one man would finish the day on the podium after his 50th-and-final trip to the venue, and another would also finish in the top 3 to further add to what would be another championship-winning season.

Possibly discussing the day's outcome above are Chris Carr, Jake Johnson and Kenny Coolbeth, Jr. awaiting the 'go' sign from AMA Pro Flat Track officials just prior to what would be a very exciting day-as usual-at the Springfield Mile II, round 16 of the 20-race season.

After 12 wins on the historic venue, California transplant and current Pennsylvania resident Chris Carr would come within .012 seconds of adding to that total on his #4 American Motorcyclist Assoc/Classic H-D/DFW Honda/Arai-sponsored XR750, only to see former team mate and long-time friend Willie McCoy edge out the 7-Time AMA Grand National Champion.  Carr would be one of the first to greet the first-time winner as he rode onto the podium after his victory lap and other than McCoy's, had the biggest smile during the ceremonies.

It would be the last time he would race the Springfield Mile as his Farewell to Flat Track Tour 2011 was starting to wind down after over a quarter century of professional motorcycle racing.  Closing his final season out with gusto, Carr would end the season ranked in the 5th spot and would be only one of five men on the season to make all 20 main events (Johnson, Jared Mees, Sammy Halbert and Coolbeth are the others.)

And Jake Johnson would ride his #1 Zanotti Racing/Schaeffer's H-D/Boughner Racing/Arai-sponsored XR to the 3rd spot on the rostrum at the end of the day by .064 seconds behind winner McCoy.  Cool-as-a-cucumber Johnson had a pretty big grin on his face and was also very congratulatory towards McCoy.  He also was happy to finish on the box for the second time at Springfield (2nd in the May race) and possibly pondering the big picture in retaining his 2010 AMA Grand National Championship with now only four rounds left on the season.

Just less than six weeks later Johnson was the first repeat AMA Grand National Champion since Carr in '04-'05, when he closed the season out with a double dose of wins at Calistoga and Pomona.  (Of note, Kenny Coolbeth, Jr. won the AMA Grand National Twins Series Championship from '06-'08.)  And he has a busy off-season going on with some of the track day schools he's doing with Mike Hacker, not to mention getting married to Johnny Lewis' sister in December!

Coolbeth (seen almost obscured to Johnson's right) ended the day in the 4th spot (.112 seconds behind McCoy) and just shy of a spot on the box with his #2 Harley-Davidson Motor Co/Screamin' Eagle/Spectro Oils/Fox-backed factory H-D XR750.  After wins at DuQuoin and Hagerstown earlier in the season, The King of Cool had a another super year in finishing 4th in the overall standings behind defending GN Champ Johnson, Mees and Halbert.

Also mostly hidden in this shot in the background is Jared Mees next to his #9 Rogers Lake Racing/Screamin' Eagle/Blue Springs H-D/Lucas Oil-sponsored XR, sporting his Gary Nixon tribute leathers.  Mees would end the day 5th, .261 seconds down, and wrapped the season's end with five wins on the year (the most by all competitors) and ranked 2nd overall.  Mees also added to his '09 AMA Grand National Twins Championship by claiming the 2011 Twins Championship at Pomona.

Thanks again to Will & Yve from The Fast and Dirty.com for this season review video from the 2011 AMA Pro Flat Track Harley-Davidson Insurance Grand National Championship Series.  Great stuff as always guys, you rock!