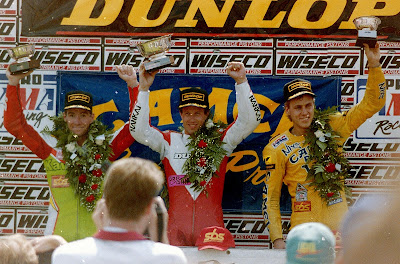 To the victor go the spoils as the top-3 finishers in the AMA Superbike Championship Wiseco Superbike 100 celebrate on the podium after the running of the AMA Pro Road Racing premier event at the Mid Ohio Sports Car Course on August 2, 1992.  After 25-hard fought laps the Camel Super Cycle Weekend presented by Dunlop weekend saw Doug Polen on his #23 Ducati/Mechanica/SPA/Dunlop-sponsored Ducati 888 triumph over runner-up and defending AMA Superbike Champion Thomas Stevens on the #1 Kawasaki Motor Corp. USA/Muzzy/Bieffe/Nankai-backed Kawasaki ZX-7R, with Tom Kipp on the #16 American Honda/Camel/Commonwealth Racing/HRC-sponsored Honda RC30 rounding out the last spot on the box.

In addition to the class of 2011, the induction ceremony recognized the outstanding careers of two existing Hall of Fame Legends: world champion racing icons Roger DeCoster and Kenny Roberts.

Jeff Heininger, chairman of the American Motorcycle Heritage Foundation, which raises money to support the Motorcycle Hall of Fame, welcomed a sold-out crowd to the induction ceremony and voiced appreciation for their support.

“The vision of the Hall of Fame induction ceremony is only possible with partnership,” Heininger said. “You need only to look around this room tonight and see the realization of this vision. I’m honored to be a part of this effort.”

“What an evening this has been,” said King, as he closed out the program. “Gathered in this room tonight with our heroes and legends, we are reminded that events like this don’t occur often enough.

With well over 400 members, today’s Hall of Fame is a Who’s Who of men and women who have thrilled us, inspired us and, in many cases, brought a tear to our eye with ground-breaking achievements that have forever altered the world of motorcycling.”

The title sponsor of the induction ceremony was AMA Visa Card from Capital One. KTM was the presenting sponsor. Zero Motorcycles was the official Motorcycle Hall of Fame ring sponsor.

Phil Schilling was one of motorcycling’s most accomplished journalists and an expert race tuner who set the early mark for Ducati motorcycle’s on-track success in America.

Schilling was teaching at the University of Wisconsin when Hall of Famer Cook Neilson asked him to become managing editor of Cycle Magazine. Schilling and Neilson developed Cycle Magazine into the gold standard of motorcycle periodicals in the 1970s.

Schilling and Neilson were not just successful at the editor’s desk. In 1977, they entered a Ducati in the Daytona 200 and gave Ducati its first AMA Superbike win in the United States.

Schilling was joined on stage by Neilson, who read Schilling’s comments on his behalf.

“Thank you to the American Motorcyclist Association for this tremendous honor and to all those who nominated me, wrote letters on my behalf, and voted for me,” Neilson read. “I am humbled and proud beyond words to be in the company of so many of motorcycling’s great talents and industry leaders and my fellow Hall of Fame classmates.

“I have been fortunate in my life to do exciting work that I love alongside people I love and admire. Cook’s and my success at Cycle Magazine and on the racetrack was due in large part to the talent and hard work of an army of people, who share in this honor and deserve our gratitude.”

Stu Peters is one of the most prolific and enduring motocross promoters in the history of the sport in America. Peters’ company, the Continental Motosport Club (CMC), has been promoting motocross races since 1968.

Although Peters has expanded beyond his Southern California base, his early start and subsequent success in what became a hotbed of motocross competition in the 1970s, 1980s and beyond, established his presence in the national consciousness of American motocross.

Peters, who raced motocross professionally in Europe in the 1950s, was already actively running local events when the AMA approached him to promote two rounds of the 1970 Trans-AMA Series, which became the sport’s first national championship series in the United States sanctioned by the AMA and recognized by the FIM (Federation Internationale de Motocyclisme), the world governing body for motorcycle sport.

Today, CMC Racing has grown into one of the largest motocross racing organizations in the country.

“Most of all, I’d like to thank my family for holding up the fort,” Peters said. “I also thank the Hall of Fame for honoring me with this great award for doing something I loved to do and would have done anyway.”

Fox founded Parts Unlimited Distributing in 1967 to distribute motorcycle parts and accessories to dealers. Today his umbrella company, LeMans Corp., is based in Janesville, Wisc., and it employs more than 1,000 people in operations spread across the U.S. and in Europe. Parts Unlimited serves the “metric” side of motorcycling, while Drag Specialties serves the American V-twin industry. The company’s own brands include Thor Motocross, Moose Off-Road, Icon and Z1R Helmets.

Fox elevated motorcycling and the sport of motorcycle racing nationally by creating a state-of-the-art distribution system that got parts to dealers quickly and by sponsoring motorcycle racing series as well as amateur and professional racers. His sponsorship dollars also supported various races and series to help grow the sport.

“I’m honored to be here,” Fox said. “This business means so much to me. I’m still enjoying working every day. I still go in early and leave late, but it’s the employees who do all the hard work. I really enjoy this industry. It’s been good to me.”

Norbert Schickel was an innovative designer and builder in the early years of American motorcycle manufacturing. As the founder of Schickel Motor Co., Schickel was part of the motorcycle design boom that occurred in the United States between 1905 and 1915.

Schickel’s vision and designs were evident in his two-cycle motorcycles that he developed. He also helped popularize the twist grip control and had a patented “spring fork front suspension” and “fly wheel magneto.”

“If Norbert Schickel were here today he would be thrilled by his selection and would take great pride in knowing that his designs and innovations were worthy of Hall of Fame recognition,” Anderson said. “It is a great honor for me to represent my grandfather here tonight. Norbert Schickel’s selection to the Class of 2011 is a dream come true for our family and attending his induction is a once in a lifetime opportunity for us to celebrate his achievements.”

Doug Polen was a dominant national and world champion roadracer in the late 1980s and early 1990s.

Polen had a series of strong winning performances in motorcycle roadracing in the United States and abroad, including winning 45 of 51 Suzuki Championship Series events in 1991 and earning the World Superbike title by 150 points.

“Being recognized with so many iconic people is touching, and to see my career made permanent as part of the Hall of Fame is really something,” Polen said. “I’ll always have that. I’m truly honored to be inducted into the Motorcycle Hall of Fame.”

Roger DeCoster’s name is practically synonymous with the sport of motocross, and he is generally recognized as the best-known MX racer in the first 50 years of the sport.

He also was a member of six winning Belgium Motocross des Nations teams, was a Gold Medalist in the International Six Day Trial (Enduro) and earned numerous national championships in his native Belgium, including a national Trials title.

DeCoster continued to find success after his racing career. He was the manager of the first U.S. team to win the Motocross des Nations in 1981, and managed many U.S. teams at the prestigious event over the years to the present day.

Today, DeCoster is in charge of KTM’s Supercross and motocross efforts in the United States. His stature is such in the world of motocross that he is often simply referred to as “The Man.”

“I have to thank America for welcoming me,” DeCoster said. “First was Bud and Dave Ekins. I met them in Germany in 1964, and it was the beginning of a great journey in America. We have come a long way from when I was inducted in 1999 in the AMA parking lot under an E-Z Up. This is a fantastic event.”

Perhaps more than any other competitor, Kenny Roberts has put his stamp of dominance on American and World roadracing, both as an AMA National Champion, a Grand Prix World Champion and then as a Grand Prix team owner.

“King Kenny” Roberts won his first-ever AMA Grand National race in 1972 and went on to win 33 AMA Nationals in dirt-track and roadracing, including the prestigious Daytona 200 three times.

A two-time AMA Grand National Champion, Roberts moved to the world stage and became the first-ever American to win a 500cc Grand Prix motorcycle racing world championship in 1978. In the following years Roberts dominated the World Grand Prix circuit, and by the end of 1980, he had captured three consecutive World 500 Grand Prix titles.

The Concours d’Elegance is Saturday, Nov. 19, and the racing banquet is Sunday, Nov. 20, also at the Red Rock.

In addition, the weekend features the final round of the GEICO AMA Racing EnduroCross Championship Series on Saturday evening at the Orleans Arena.


About the American Motorcycle Heritage Foundation


You can view a short video here of the some of the pre-ceremonies and induction ceremonies here thanks to the American Motorcyclist Association and their YouTube video.  In the background you can see former inductees including 13-Time AMA Grand National Champion tuner Bill Werner, multi-time AMA Motocross Champion Bob Hannah, as well as interviews with other former inductees including Don Emde, Jack Penton and Craig Vetter.

The ceremonies took place on Friday, November 18, 2011 at the Red Rock Casino in Las Vegas, NV.: