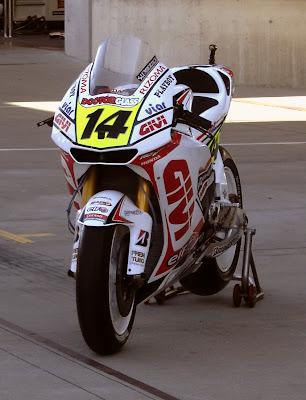 The LCR Honda RC212V of rider #14 Randy DePuniet sits outside the team's garage during the 3rd Annual RedBull Indianapolis MotoGP weekend in August 2010.  The French rider and the HRC satellite team were a staple on the MotoGP grids during the '08-'10 season, finishing the seasons ranked 15th, 11th and 9th in the respective championship standings for those years.  DePuniet moved to the Pramac Ducati team for the 2011 season, with Toni Elias stepping in to take over the reigns of the Lucio Cecchinio-managed team's Hondas.  However, 2011 was not a good year for the team with rider Elias suffering a handful of crashes and injuries that kept him and the team well out of the top-10 standings.

Stefan Bradl, who won the second Moto2 World Championship in 2011, will ride the LCR Honda RC213V in the 2012 and 2013 season, in a signing that was announced by both parties late yesterday.  The German rider tested the team's RC212V during the season-ending tests and made enough of an impression to get the team to sign him for the next two seasons.

Thanks to David Emmett and MotoMatters.com for this story and confirmation about LCR Honda
signing 2011 Moto2 World Champion Stefan Bradl to ride the team's RC213V in the 2012 MotoGP World Championship:

You can check out more on the LCR Honda team here, compliments of their official website: