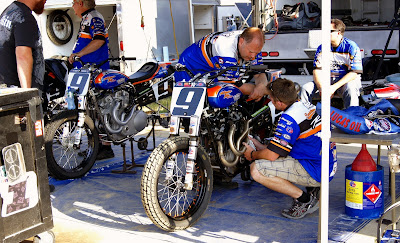 Rogers Lake Racing team crew chief and head wrench Brent Armbruster discusses one of the team's three machines on hand with another crewman during a break in the on-track action at round 11 of the 2011 AMA Pro Flat Track Harley-Davidson Insurance Grand National Championship Series at the I-96 Speedway on July 23.  Team rider Jared Mees went on to win his 3rd of 5 wins on the season later in the evening on the #9 Rogers Lake/Blue Springs H-D/Screamin' Eagle/Lucas Oil-sponsored H-D XR750, leading Bryan Smith and Jake Johnson to the podium ceremonies in Lake Odessa, MI.

Mees and Armbruster had a super year together, winning Brent's first AMA Grand National Championship Series event together at the Springfield Mile I event, and going on to capture the 2011 AMA Grand National Twins Championship at the end of the season, based on their fine efforts on and off the track.  Along with Mees' other wins at Hartford, Knoxville and Brainerd, Jammin' Jared racked up an amazing run of top 5s that saw only three finishes on the year where he didn't score double-figure points in a National main event, and at the end of the season led all competitors with the most wins.

Look for Mees to come back strong as ever for the 2012 AMA Pro Flat Track Grand National Championship Series season.  And don't be surprised to see him competing in the ICE Speedway Series over the off-season, and maybe even repeating as the champion in the ICE Series again.

Thanks go out to Will & Yve from The Fast and Dirty.com, Blue Springs H-D and Jared Mees for this great season-ending video from the Pomona Half-Mile: