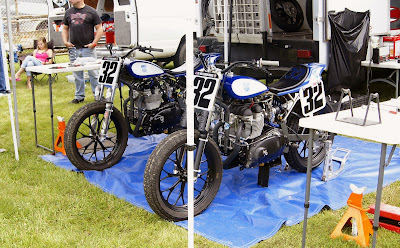 The Bonneville Performance/GBR/Wiseco Pistons/GBR-sponsored Triumphs of National #32 Shawn Baer sit under the team's pop-up during round 16 of the 2011 AMA Pro Flat Track Harley-Davidson Insurance Grand National Championship Series at the Illinois State Fairgrounds mile oval on September 4.  The Bill Gately/Bonneville Performance team, based out of Port Orange, FL. has struggled to make the mains in AMA Flat Track Grand National events, only able to do so in 10 events over the course of the last two seasons, but have turned some heads when they have put the sparkling blue and white machine into the show.

Going up against the long-standing Harley-Davidson XR750 in the series, the onslaught of the Kawasakis hitting the track the last two years, and factor in the great run that the Lloyd Brothers Motorsports team has had with Joe Kopp in '10 and Brad Baker in '11 with the Ducati, and you have a very deep field of top-level competition to race with in order to make a National main event in the 21st Century.

They may have just gotten another foot up on the competition for the 2012 season, though, with the announcement last night from 2011 AMA Pro Motorcycle-Superstore.com Pro Singles Champion Mikey Martin that he will be the team's rider in the 2012 Twins Series events, and that the Triumph factory will be providing support to the team for next year as well.

Tyler Porter and his Fight For Dirt Track.com site broke the news last night via Twitter and Facebook that Martin will be the team's rider and the Triumph factory will be stepping back into the AMA Grand National Championship for the first time in over 35 years.

Bonneville Performance is a company that specializes in all things Triumph-'old and new' as their website states-to set up your machine with, and offers a number of Mikuni, Wiseco and other after-market goodies to make your machine a street tracker special.  Their street tracker displays at the Nationals are absolutely pristine.  The team has campaigned Shawn Baer the last two seasons on the circuit, and Mick Kirkness #87 rode the machine this year at the season-finale at Pomona, albeit failing to make the main event. 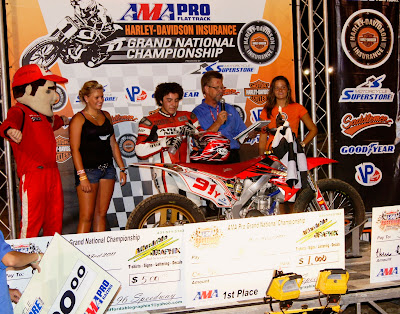 AMA Pro Flat Track announcer Barry Boone reads off the list of sponsors for the fans while Lake Odessa Half-Mile AMA Pro Motorcycle-Superstore.com Pro Singles winner Mikey Martin gets set to chug some water after a runaway win at round 11 of the 2011 AMA Pro Flat Track Harley-Davidson Insurance Grand National Championship season.  The #91Y Weirbach Racing/General Engineering/Barnett Clutches/Spectro-sponsored Honda CRF450R-mounted rider took the win by 4.322 seconds over runner-up Conner Anderson, for his second of three wins on the season.  Martin went on to clinch the 2011 AMA Pro Motorcycle-Superstore.com Pro Singles Championship at the last round of the season at Pomona on October 15.

With Martin moving up to the Expert ranks after the season was over last month, he will be wearing the #91 for the upcoming season, and with a white number plate and a set of black letters on them.  And he will be sporting that nice new number plate on the front of the Bonneville Performance Triumph for the 2012 AMA Pro Flat Track Grand National Championship Twins Series events.  As previously mentioned, Tyler Porter and Martin both broke the news last night via Twitter and Facebook. 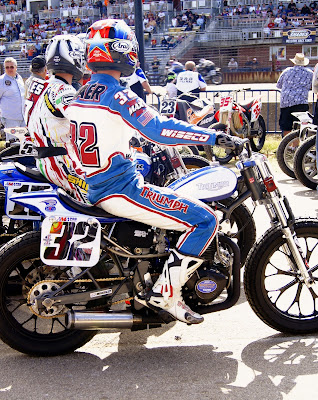 Shawn Baer is shown on the #32 Bonneville Performance/Wiseco Pistons/GBR/Eckhart Roofing-sponsored Triumph just prior to rolling out for the semi #2 race at the Springfield Mile II event on September 4, 2011, where the Pennsylvania resident finished in the 7th spot, .424 seconds out of making the National main event for the day.  The 2011 AMA Pro Flat Track Harley-Davidson Insurance Grand National Championship Series season was a rough year for Baer, only managing to make five of the eleven Twins events on the year, with a best-finish of 14th at the Springfield Mile I round in May.

It looks like Shawn will be out of this ride for the 2012 AMA Grand National Championship Series, with Mikey Martin taking over the reigns.  Baer is to be lauded, however, in his help in developing the Triumph into a National main event semi-regular, something that hasn't been seen in several decades on a half-mile or mile event.

Thanks to Tyler Porter and his super site, Fight For Dirt Track.com for this great news about the factory Triumph coming back to AMA Pro Flat Track to help out the Bonneville Performance Triumph team for the 2012 AMA Pro Flat Track Grand National Twins Series Championship.  You can read more over at Tyler's site here:

And you can check out the great stuff that Bonneville Performance offers for the Triumph brand here, including their online catalog: