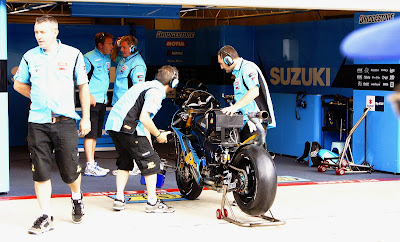 Rizla Suzuki MotoGP team manager Paul Denning (back of garage left) talks with another team member while the team's GSV-R is being readied for rider Alvaro Bautista for the RedBull Indianapolis MotoGP's 4th annual event in August 2011.  Bautista had just earlier qualified in the 9th position on the grid at the Indianapolis Motor Speedway event, and went on to finish in a very solid 6th place the next day.  Struggling with being a one-man team, Bautista and the Suzuki MotoGP are to be commended for their great efforts this year to gain good results, when he is not out due to injuries.

Bautista looked good in leading the free practice session yesterday afternoon in the wet at Valencia, and was 7th in the dry session this morning.  He went on to qualify 5th today, only .568 seconds behind Repsol Honda pilot Dani Pedrosa.  The only bad thing-Casey Stoner was over 1 second faster then Pedrosa in taking the pole at the Spanish circuit on one of the other lightning-fast Repsol Honda RC212Vs.

For a team that hasn't won in over four years and struggled mightily over the course of the last few, they have done a whirlwind job of getting top 10 results in the GPs that they have finished.  And the grids for the premier road racing series in the world look to remain with a blue machine filling a slot come the 2012 season.

With expectations since late last season that Suzuki would not return for the 2012 season in the MotoGP World Championship, it looks as if that has changed--for the better.  The loss of their presence at the GP rounds in the garage or on the grid would be devastating to MotoGP, leaving only Honda, Ducati and Yamaha to field factory-backed efforts.  With Suzuki cutting back for the 2011 season to one rider, it seems to have helped in terms of concentration of working on getting the 800-based GSV-R more competitive.  And with the word of their return a possibility exists they may re-expand to two riders for 2012, which many are hoping will go to former Suzuki MotoGP pilot and 2011 British Superbike Championship runner-up John Hopkins.

What may be the only struggle in the early part of the season is Suzuki is still planning to run the 800-based GSV-R while the rest of the factory and satellite-backed teams run the new full-blown 1000-based prototypes.  The new 'CRT' teams will help to fill the grids with production-based rules with some variances in suspension set-up, which is Dorna and MotoGP's way of trying to spread the wealth, but more importantly, fill the grids to something more than the 16 or 17 riders that have contested the series for the last few years.

There are still a lot of cards to play out in the off-season, even with the tragic passing of Marco Simoncelli and the seat on the San Carlo Gresini Honda now open and up-for-grabs.  Bautista is assured the #1 spot for his efforts this year, but anything beyond that is still up in the air--especially until Suzuki says 'officially.'  Off-season testing starts on Tuesday at Valencia, and it is confirmed Suzuki will take part--good news in itself.

Here's the story from the good folks at Motorcycle News.com from across the pond, that revealed the great news about Team Suzuki most probably staying with their MotoGP efforts into the 2012 season: