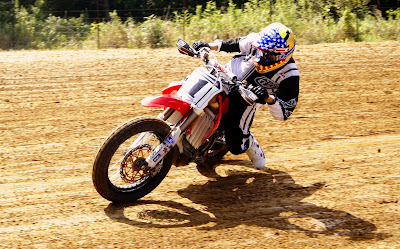 Zanotti Racing/Schaeffer's H-D/Boughner Racing/Arai-sponsored Jake Johnson shows some style and finesse while qualifying his #1 Honda CRF450R for round 14 of the 2011 AMA Pro Flat Track Harley-Davidson Insurance Grand National Championship Series at the Peoria TT on August 21.  Johnson would set 3rd-fast time for the day, .201 seconds behind fast qualifier Henry Wiles, with Jared Mees in the 2nd spot.  Jersey Jake would race to his heat 3 race win, and go on to also take 3rd in the Dash event behind winner Mees and 2nd-place Wiles.  His 4th place finish in the National main would be one of only seven rounds this season where the defending and repeating AMA Grand National Champion would not stand on the podium.

Johnson, who is planning on getting married next month to Johnny Lewis' sister, is one of a handful of racers who gives back to the sport of flat tracking.  The Pennsylvania resident has been one of the rider instructors at some of the off-season rider camps, with Mike Hacker's RIDE Academy being one of his regular stints.  The RIDE Academy is hosted by former AMA Grand National Championship contender Hacker to help teach riders at any and all level of skill-sets to better utilize those on the track. 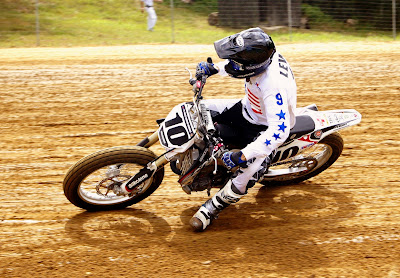 Johnny Lewis takes his #10 Scott Powersports/Dubach Racing Developments/Saddlemen/Triple J Racing-backed Honda CRF450R through it's paces during practice for the Peoria TT round of the 2011 AMA Pro Flat Track Harley-Davidson Insurance Grand National Championship Series on August 21.  Lewis would qualify in the 12th spot for the day, .580 seconds behind fast-qualifier Henry Wiles, and would race to a 3rd-place finish in his heat behind heat and event-winner Wiles and Rob Pearson to qualify for the National main event, where he would end up finishing 10th on the day.

Lewis is sporting one of the Gary Nixon tribute jerseys that Metro Racing supplied to the riders for the Peoria weekend, after the untimely passing of the former 2-Time AMA Grand National Champion in early August.  The former SuperMoto rider and Champion had an off-day by his standards at the famed Peoria track, after placing in the top 5 the last two seasons at the August TT round.

One of the more colorful riders on and off the track, JL10 and Johnson spend some of their off-season time away from the AMA Grand National Championship Series in teaching students at the Mike Hacker-helmed RIDE Academy rounds, as well as some other riding ventures.

And if this video doesn't have you doubled over laughing your a.. off, then you definitely don't have a pulse.  Johnson and Lewis got together recently for some play-time riding, and broke out their mini-bikes to do so stunt riding.  This is too much!