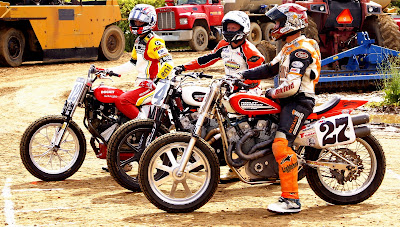 2011 AMA Pro Flat Track Saddlemen Rookie of the Year Brad Baker looks over the track while waiting on his #12 Lloyd Brothers Motorsports/TeamHurtByAccident.com/Foremost Insurance/ENI USA-sponsored Ducati 1098 for the final round of qualifying to take place in the Expert Twins Series stop at the I-96 Speedway on July 23.  Round 11 of the 2011 AMA Pro Flat Track Harley-Davidson Insurance Grand National Championship Series in Lake Odessa, MI. saw The Bullet take fast-time and win his heat, in route to a 9th place finish in the National main event.

Possibly discussing the heavy machinery sitting just outside the pit area before heading out to qualify are Chris Carr on his #4 American Motorcyclist Assoc/Classic H-D/DFW Honda/Arai-sponsored XR750 with Rob 'Bugs' Pearson on his #27 American H-D/Matt Reecy Racing/Movin' Mike/Yoho Ent-backed XR.  Carr would finish 3rd in his heat and an eventual 5th-place in the main, while Pearson would miss the main after finishes of 6th in his heat and 18th in his semi race. 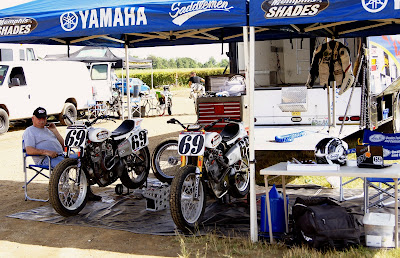 AMA Hall of Fame tuner Babe DeMay sits alongside of his Memphis Shades/DeMay Racing/WKR/Arai-sponsored H-D XR750s of rider #69 Jethro Halbert during a break in the on-track action at round 11 of the 2011 AMA Pro Flat Track Harley-Davidson Insurance Grand National Championship Series in Lake Odessa in late July.  The man that has tuned for riders including Mark Brelsford, Rex Beauchamp, Corky Keener, Kevin Varnes, Kenny Roberts, and many others has been around the AMA Flat Track Series since getting his novice license back in 1952, and has ridden and tuned BSAs, Yamahas and Harley-Davidsons throughout his lengthy career.

No official releases out yet, but I picked up off of one of the Twitter feeds this week that Rob 'Bugs' Pearson and fellow-Illinois resident Babe DeMay will be teaming up for the 2012 AMA Pro Flat Track Grand National Championship Series.  Pearson, who resides just east of Peoria, and Quad Cities resident DeMay won't have to travel too far without one another being less than 100 mile apart.