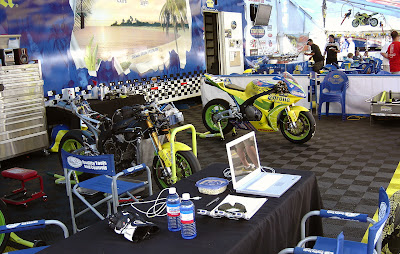 A pair of Honda CBR1000RRs sit under the Corona Extra Honda team's awning in preparation for the Honda Super Cycle Weekend presented by Dunlop Tire at the Mid Ohio Sports Car Course in August 2007 during the AMA Superbike Championship Series' annual stop at the Lexington, OH. facility.  The machines carried rider James Ellison's #77, along with sponsorship from Corona Extra/Parts Unlimited/Cycle Gear/Joe Rocket for the English-born rider who had joined the team at the end of the 2006 season after competing in the 2006 MotoGP World Championship for the Tech 3 Yamaha team.

Ellison finished the 2007 AMA Pro Road Racing season ranked in the 11th position in the AMA Superbike Championship presented by Parts Unlimited, with best finishes of 5th in race two at Road America and a pair of 8th-place finishes at Infineon Raceway in race two and Road Atlanta in race two.

Teaming up with Paul Bird Motorsport for the 2012 MotoGP World Championship, the team is reported to be utilizing Aprilia's 2010 World Superbike Championship-winning RSV4 motors in the series' new-for-2012 CRT class, which will run alongside the grid with the remaining Honda, Yamaha and Ducati prototypes.

Thanks to Dean Adams at SuperbikePlanet.com for this confirmation of James Ellison heading back to MotoGP for the 2012 season with the Paul Bird Motorsport team:

And here is some more on James Ellison from Dean Adams at SuperbikePlanet.com.  This interview with Ellison from December 2006 was released after it was announced he would be riding for the Corona Extra Honda team in the AMA Superbike Championship Series for the 2007 season.  It also has a couple of nice shots of Ellison in his Corona gear while tire testing at Daytona in December '06: